Skip to content
Homepage astronomy With Love, from Bennu 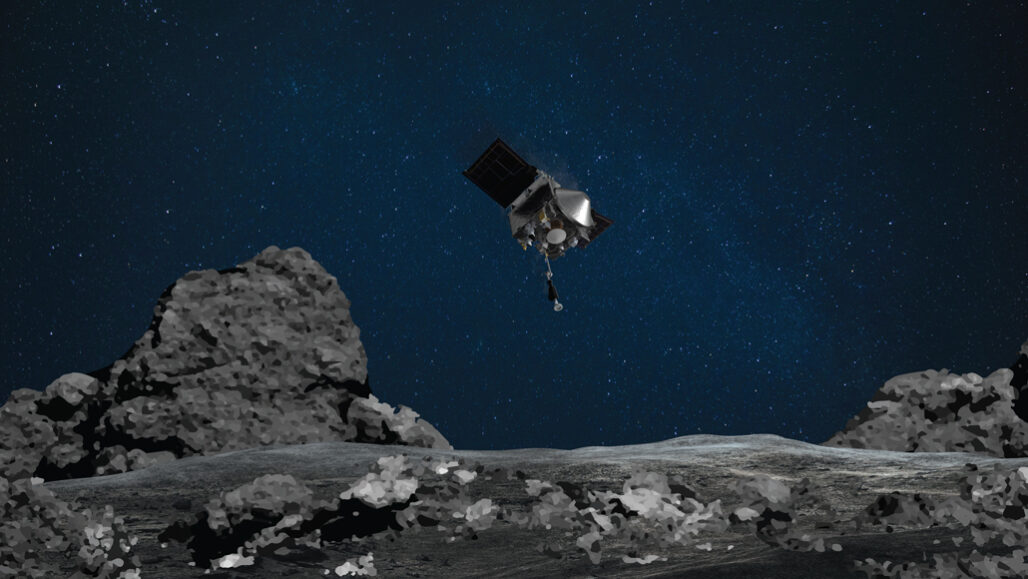 With Love, from Bennu

After a four-year journey, NASA’s robotic spacecraft OSIRIS-REx briefly landed on the rock-covered surface of the asteroid Bennu on October 20, 2020. The craft collected rock and dust samples in a precise operation 330 million kilometres away from Earth.

After OSIRIS-REx reached Bennu in December 2018, it spent almost two years creating detailed maps of the surface features and the composition of this 500-meter-wide asteroid. Observations sent from the Earth suggested that Bennu should be smooth and sandy, but instead, when OSIRIS-REx arrived, it found a dangerous and rocky landscape.

OSIRIS-REx touched a rocky area on the surface of ​​Bennu, called Nightingale, with a thin robotic arm tipped with a special sampling device. During the contact, which lasted for only 6 seconds, the spacecraft sprayed nitrogen gas onto the asteroid’s surface in order to blow some of the surface dust and small pebble fragments into the sample collector.

As the data transmission between Bennu and the Earth takes about 18 minutes, the minibus-sized spacecraft carried out this precise manoeuvre automatically, on its own.

Scientists hope to collect at least 60 grams of samples, but the spacecraft can lift up to two kilograms. If the spacecraft fails to bring enough material, another test will be carried out on January 12, 2021, in another area near the equator of the asteroid, somewhere relatively less rocky.

Researchers are interested in analysing the compositions of the asteroids in the solar system as they are made of the same materials that make up the planets. If OSIRIS-REx successfully returns home in September 2023, it will bring the largest space sample since the Apollo era. Not all samples will be analysed immediately, just like those brought from the Moon by the astronauts of Apollo. NASA made some of those public 50 years later.

Last year, Japan had become the first country to touch an asteroid when the Hayabusa2 probe collected a sample from Ryugu, now on its way back to Earth.