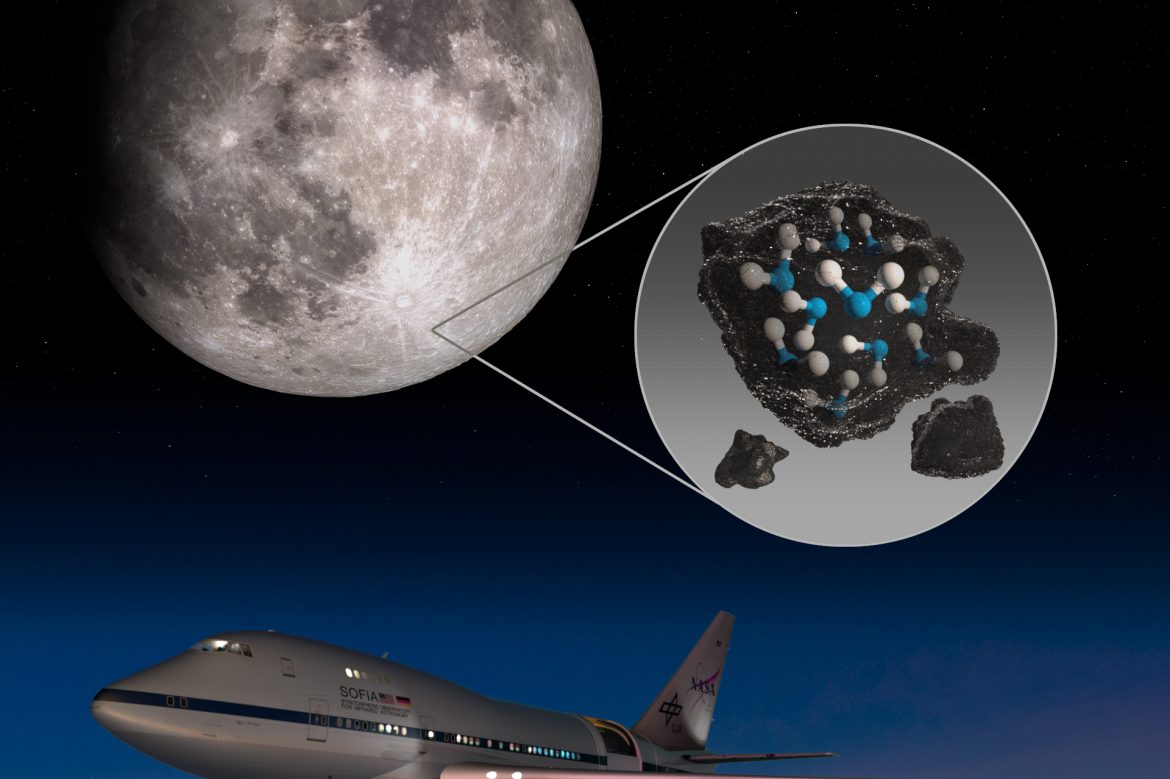 Water on the Sunlit Side of the Moon

For decades, the astronomers predicted that there might be water on the Moon. In recent years, this speculation was confirmed when numerous satellites orbiting the Moon detected water ice in the lunar south pole. The ice in this part of the lunar surface, known as the Aitken Basin, was able to persist due to many craters that are permanently shaded.

Until now, scientists had assumed that water would only be found in the permanently-shaded craters on the Moon. However, with the help of NASA’s Stratospheric Observatory for Infrared Astronomy (SOFIA), traces of water were detected in the sunlit regions of the Moon for the first time. The discovery suggests that water could be scattered all over the lunar surface, instead of being limited only to its dark corners.

Operated by NASA and the German Aerospace Centre, SOFIA is essentially a modified Boeing 747SP aircraft equipped with a 2.7-metre infrared telescope. Conducting its research at an altitude of 11,600 to 13,700 metres to minimize the atmosphere’s infrared blocking effect, SOFIA detected the specific wavelength unique to water molecules, at 6.1 microns, during a flight in August 2018. It was coming from a region near the Clavius ​​crater in the southern part of the Moon.

The research team calculated that water in concentrations of 100 to 412 parts per million was trapped in a cubic meter of soil around the Clavius ​​crater. This is less than half a litre of water per metric ton of lunar land, about 100 times less than the amount the Sahara desert has. Despite this insufficient amount, the discovery is crucial as it raises new questions about the origins of lunar water and how it can persist in the unfriendly lunar environment.

Several theories as to how water may have reached Earth’s only natural satellite include the possibility of being deposited by the micrometeorites raining down on the lunar surface, and the hydrogen carried by the Sun’s solar winds interacting with the oxygen-bearing minerals in the lunar soil.

These water molecules are not found in permanent ice like the water found in the permanently-shaded regions of the Moon. They are not in the liquid form either. Instead, they are thought to be attached to another material on the Moon’s surface.

Water is a valuable resource in terms of both scientific purposes and for use by human explorers. If we can utilize the resources on the Moon, there will be less need for transporting water, which will, in turn, make more room for transporting equipment to enable new scientific discoveries.

Naturally, a few unanswered questions remained. First of all, it is important to know whether the water on the sunlit parts of the Moon is accessible. The origins of this water, how it could accumulate and persist in these regions, and how it is transported across the lunar surface are still mysteries waiting to be explained.