Skip to content
Homepage Antropoloji Why Do We Have Chins? 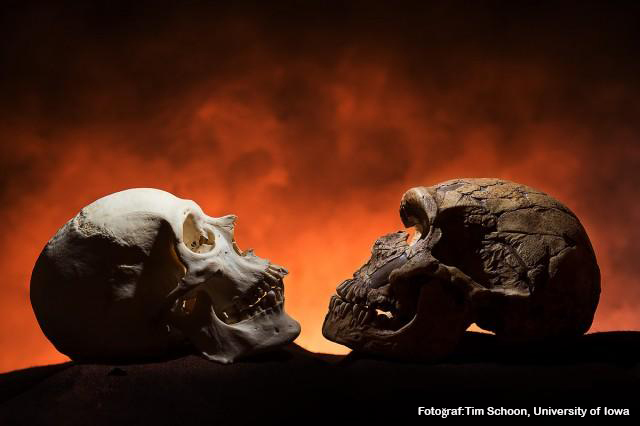 Why Do We Have Chins?

Our close relatives, the apes don’t have it. Our distant ancestors did not have it. Even the Neandertals (top picture, on the right) who co-existed with us for some time did not sport one. For that matter, no other species have it. Our chin is special to us.

A group of anthropologists from the University of Iowa led by Nathan Holton investigated the reason. The team monitored the anatomical development of 40 individuals from 3 to beyond 20 years of age. The results, published online in theJournal of Anatomy, show that our chins are not the product of the operation of mechanical forces associated with chewing and the need to reduce the stresses and strains on our mandibles. For the mechanical forces, including chewing, were found not to be strong enough to impart  added resistance to the mandible so as to necessitate the formation of new bone.

Then why do we have a chin protruding outward? Researchers see the answer in the diminishing of human face. As our faces have steadily shrunk in the human lineage (being 15 percent smaller than those of Neandertals) a small and pointed appendage was added to the mandible as a result of the changing facial geometry.

The results concur with findings published earlier by a team led by paleoanthropologist Robert Franciscus, also from the University of Iowa.  See:https://kurious.ku.edu.tr/en/news/men-became-feminized-tameness-led-mode…

According to Franciscus, who also contributed to the new paper, human chin is a product of changing lifestyles of our ancestors. The change started 80.000 years ago when modern humans were living as isolated groups of hunter-gatherers and gained momentum with the migration out of Africa 20.000 years later.

Common interests brought together dispersed hunter-gatherer communities which established social networks, with cooperation taking the place of conflict and aggression. The consequence was reduced levels of hormones, particularly in males, with a smaller stock of testosterone leading to significant changes in the craniofacial area. The most striking of these changes was the diminishing and flattening of the face. And the adaptation of facial features to the expanding size of the head engineered a wider mandible with a pointed protrusion.