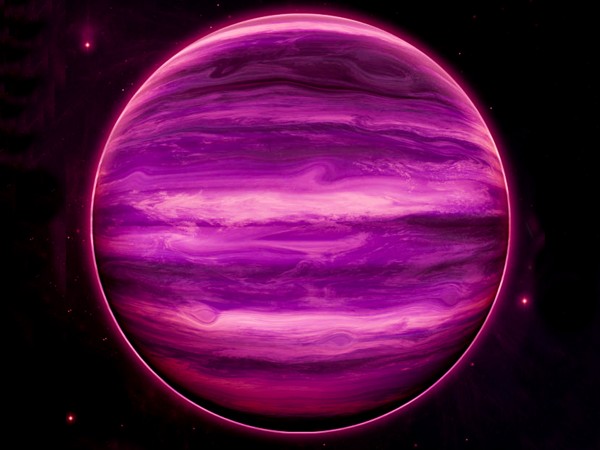 When talking of water, we normally refer to the water  we drink or  swim in.  But the clouds scientists have detected on WISE J0855-0714 just 7 light years away,  the fourth closest object to the sun after  the (triple star system) Alpha Centauri, Barnard’s Star and (binary brown dwarf system) Luhman 16, are made of water ice.

Although appearing far more poetic  in the artists’s conception above than suggested by its name and class , the object  falls in the category of  failed stars  dubbed “brown dwarfs”.  Ranging between gas giant planets and the lower end specimens  of the red dwarf stars which are smaller and cooler than the sun,  the brown dwarfs lack the minimum mass (0.08 solar) required for igniting nuclear fusion in their cores. Instead, they  glow with thermal radiation from gravitational energy, before they cool  and disappear from view.

Those relatively bigger may temporarily ignite deuterium fusion according to current models. Deuterium is a heavier isotope of hydrogen, whose nucleus comprises of a single proton. Deuterium nucleus, on the other hand, harbors a neutron in addition to the proton.  Since electrically neutral  (hence the name) neutron partly masks the strong electrostatic repusion between positively charged protons, deuterium nuclei  fuse more readily compared to hydrogen. The fusion of hydrogen nuclei (protons), to produce the energy to balance the great pressure of the stellar mass and ensure a long life  for the star, requires far more mass to provide necessary density and heat at the core.

Astronomers divide brown dwarfs into subcategories L, T and Y according to their masses and temperatures. WISE J0855-0714 belongs to the Y category, coldest of the three.

And with its size equal to that of Jupiter and a mass between a third and a tenth of the largest Solar System planet, the object is said to be the coldest so far of the discovered brown dwarfs : Its surface temperature, way  below the freezing point of water, is estimated to be between , -48 ⁰C  and -13 ⁰C. This makes it far colder than the Earth (average temp:  7.2 ⁰C)  but warmer than Jupiter (-145 ⁰C at cloud tops.)

It ranks among the “partly cloudy”  brown dwarfs, sitting between those totally blanketed  by clouds and other whose atmospheres are devoid of any.  Alongside the water ice clouds, it is thought to be girdled by  clouds made of sulphides.

Water clouds on WISE J0855-0714’in are the first ones observed outside the Solar System.