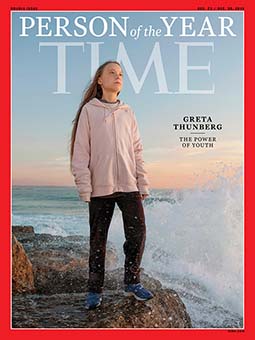 TIME’s Person of the Year: Greta

Since 1927, the famous TIME Magazine picks the most influential people, organization, object or idea of the year to place on its cover. Until now, besides leaders including Mahatma Gandhi, Winston Churchill, and Martin Luther King Jr., scientists like Albert Einstein (who was chosen the person of the century) and American soldiers who joined the Korean War (because of the challenges they faced), and even the computer itself as an invention took place on the cover of this magazine. This award sometimes leads to controversy, as dark political characters such as Adolf Hitler and Joseph Stalin are occasionally included in the list, as well as those who have made positive contributions to the world and humanity.

This year’s TIME Person of the Year Award was given to climate activist Greta Thunberg. Thunberg, who is only 16, is also the youngest person of the year ever chosen.

In August 2018, Thunberg was overwhelmed by the incapableness of the authorities against climate change, and started a “climate strike” in front of the Swedish parliament building by “ditching” school on Fridays, with an in her hands that read “School Strike for Climate”. In the following 16 months, she managed to inspire young people from all over the world, forming a tremendous mass of young people demanding governments to take action against climate change. International interest in Greta’s actions grew so intense that she was invited to speak at the United Nations meetings, met with the Pope, and gave a speech at the recently held COP 25 Climate Change Conference in Madrid. She became the main motivation for the global climate strike on 20 September 2019, where more than 4 million people from all over the world participated. According to the famous author Margaret Atwood, Thunberg resembles Jeanne d’Arc. She symbolizes the disappointment, frustration, and desperation of many young people who claim that their future is destroyed before they even reach the age of voting, and at the same time, spreads seeds of hope.

The concept of “climate strike” she came up with, on the other hand, was chosen as the word of the year by Collins Dictionary.

“We can’t go on living like there’s no tomorrow, because we don’t have a tomorrow,” says Thunberg, “We’re just saying that”.

Thunberg is not a representative of any political party or group. Besides being unequipped to solve the problem of climate change, she is also not the first person to address the climate crisis. But she succeeded in making a change that gathered millions of people and in dragging an audience that demands urgent action. One of the reasons for this success, perhaps, is the fact that Thunberg has Asperger’s Syndrome, so she avoids unnecessary conversations and shakes the social norms by keeping away from emotional patterns. She keeps repeating the bitter truths: waters will rise, cities will sink, and millions will suffer.

Her words to the world leaders at the World Economic Forum in Davos were striking: “I want you to panic. I want you to feel the fear that I feel every day. And then take action.”

According to the surveys of Amnesty International, the young population of 22 countries sees climate change as the most important problem the world is facing. Thunberg reminds us that the current rulers of the world will not sit in their seats forever and that the young people who will take over this corrupt system are being disappointed by the adults.

This month marks the 22nd anniversary of the Kyoto Protocol (11 December 1997). In addition, the UN Climate Change Conference in Madrid (2-13 December 2019) just ended. TIME selecting Greta Thunberg as the person of the year, while climate change is hot on the agenda, will continue to inspire millions of young people struggling with climate concern.