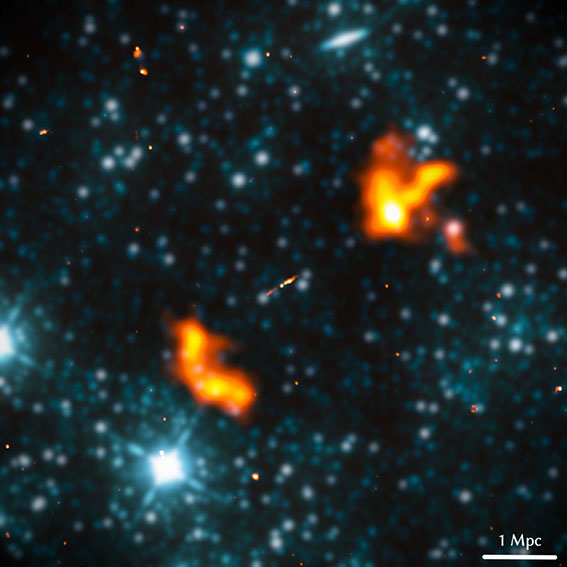 Astronomers have discovered, by chance, the largest radio galaxy ever known. Scientists currently have no idea how the giant galaxy, named Alcyoneus, got this big.

Radio galaxies are mysterious giants of the universe. Many galaxies have a supermassive black hole in their centers, which may sometimes create two jet streams that are sent into space at almost the speed of light. This stardust heats up so much that it dissolves into plasma, and glows in radio light. This is where the name of these galaxies comes from.

It’s not surprising for giant black holes in the centers of galaxies to create such structures, and the Milky Way also has two small ones, but the size of Alcyoneus amazed everyone.

Research results submitted in early February report that Alcyoneus is approximately 5.04 megaparsecs – 16 million light-years. By comparison, this roughly equals 10 Milky Ways. In fact, considering that our closest galactic neighbor, Andromeda, is 2.5 about million light-years from the Milky Way, Alcyoneus is about five times wider than the cumulative length of two galaxies and the distance between them.

If this giant structure, about 3 billion light-years away, could be observed with the naked eye, it would cover an area the size of the Moon in the sky, despite being enormously away from us.

The researchers first spotted the new galactic structure by chance after examining data collected by the Low Frequency Array (LOFAR), a network that connects almost 20,000 radio telescopes scattered across 52 locations in Europe. The LOFAR telescope’s radio eyes have only just seen the giant now because its plumes are relatively faint.

Alcyoneus may offer new clues about the structure of our universe, also known as the cosmic web, which is believed to connect all galaxies. This complex web consists of filaments of clustered galaxies separated by huge gaps.

The intergalactic medium may be playing a role in shaping the galaxy’s large plasma plumes. This is why the researchers plan to further investigate the area around Alcyoneus to see if there is anything in its vicinity that could explain its unusually huge size.