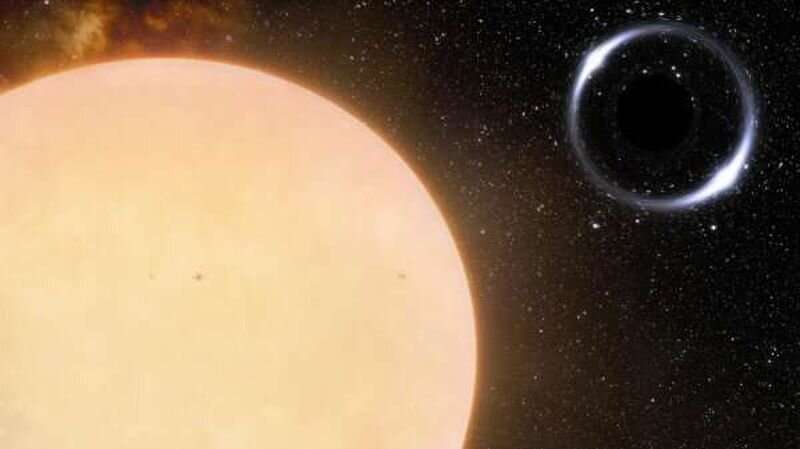 The Closest Black Hole to Earth

Black holes are possibly the most intriguing objects in the world of astronomy. Although almost every large galaxy hosts a giant black hole at its centre, smaller ones described as “stellar-mass black holes” are much higher in number. It is thought that the Milky Way alone has around 100 million of these stellar objects that weigh approximately 5 to 100 times the mass of the sun.

Nearly all known stellar-mass black holes are visible, as they steal and eat matter from their companion stars and therefore emit electromagnetic waves at X-ray frequencies. However, not all black holes are actively feeding all the time. These dormant black holes, which make up the majority, are very difficult to detect as they blend into their surroundings. To date, very few of the candidates identified by gravity detectors have been proven to be actual black holes.

Astronomers using the Gemini North telescope in Hawaii, one of the twin telescopes of the International Gemini Observatory, operated by NSF’s NOIRLab, managed to discover a the closest-known dormant black hole to Earth. Dubbed Gaia BH1 and weighing about 10 times the mass of the Sun, this dormant black hole is located about 1,600 light-years away in the constellation Ophiuchus. The newly discovered black hole is three times closer to Earth than the previous record holder, an X-ray binary in the Constellation Monoceros.

The distance between Gaia BH1 and its companion star is about the same as the Earth and the Sun. Also interesting is the fact that this binary system is not quite compatible with conventional models. According to the researchers, the mass of the newly discovered black hole indicates that the progenitor star, which later turned into the black hole would have been at least 20 solar masses. However, models also show that such a star would have a relatively short life-span and engulf its companion star as it eventually transforms into a supergiant. This raises many questions about how the binary system was formed and how many of these dormant black holes exist.

Gaia BH1 may be the closest-known black hole to Earth for now, but it’s very likely that a closer one exists. Astronomers think that the majority of approximately 100 million black holes in the Milky Way are invisible.