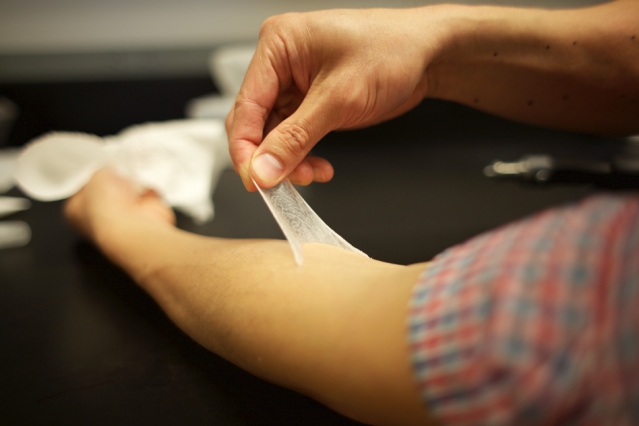 May also be used to prevent dehydration and deliver drugs…

A novel polymer material developed by scientists from the Massachusetts Institute of Technology, Massachusetts General Hospital, cosmetics and materials laboratories tightens skins and removes wrinkles for up to 24 hours and can be used to deliver drugs to treat eczema and other skin conditions.

Dubbed “second skin”, the imperceptibly thin silicone-based material applied to the skin makes eye bags disappear and helps keep the skin youthful by preventing loss of moisture from the surface. Scientists from cosmetics lab Living Proof and materials company Olivio Lab participated in the development of the material which reportedly is more elastic than natural skin.

Another potential application of the material is its use as a screen against harmful solar UV radiation, researchers say.

As skin ages it loses its tightness and elasticity. Exposure to sun speeds up this process, reducing its ability to protect the body against extreme temperatures, toxins, microorganisms, radiation and injury, they point out in their study published in the online issue of Nature Materials on May 9.

So, aiming to develop a thin protective coating that would restore the elastic properties of a youthful skin both for medical and cosmetic applications, the team first developed about a hundred types of polymer with chemical structures called siloxane made of chains of alternating silicon and oxygen atoms, which can be assembled into what is known as a “cross-linked polymer layer” or XPL.

Experimenting with each, the team finally found the one which best mimicked the appearance, strength and elasticity of natural skin.

In the method used for its application, first polysiloxane components are rubbed on the skin, followed by the addition of a platinum catalyst that drives the polymer to form a cross-linked film that attaches to the skin for up to 24 hours.