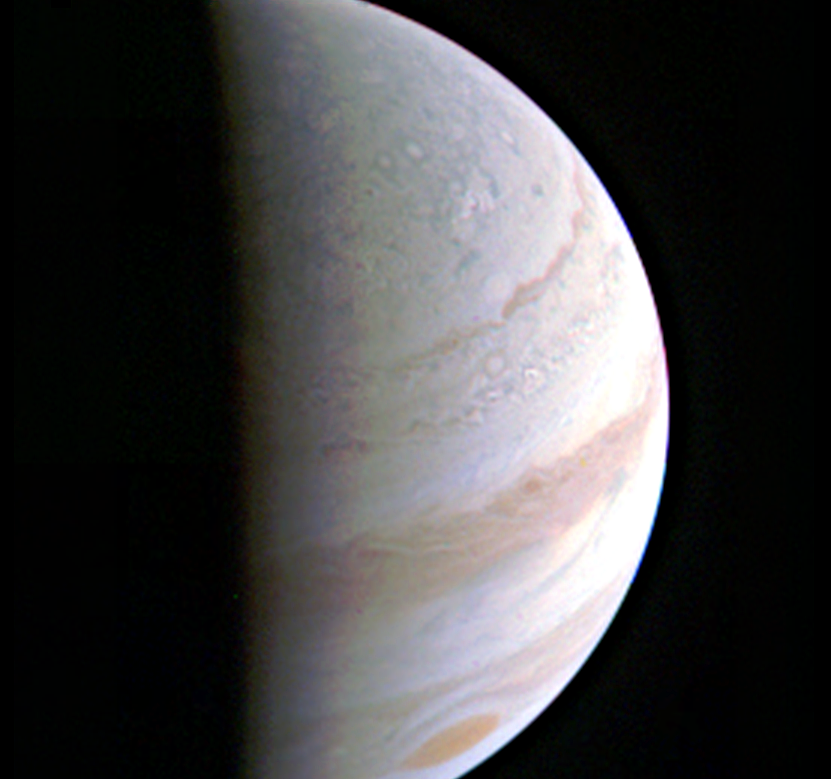 Gas giant not all ribbons…

NASA’s Juno spacecraft inserted into Jupiter’s orbit on July 4 at the end of a five-year journey made the first and closest of its projected flybys August 27, almost touching the cloud tops of the Solar System’s biggest planet.

Sent to study the dynamics, structures and make-up of the clouds shrouding the gas giant, whizzed past the topmost clouds from just 4200 kilometers above at a dizzying 208,000 kilometers an hour (For comparison, the image above was taken when the spacecraft was still 703,000 kilometers away).

An exciting feature of the mission was Juno’s orbital trajectory which enables it to image the planet’s north and south poles for the first time. And exciting indeed it was for the incredulous NASA researchers who pored over an entirely new “cloudscape”, worlds apart from the accustomed views of the planet girdled with multi-colored bands. The initial pictures released by NASA, also taken from a great distance, showed the poles as a frothy expanse of knots and vortices. The image of the South Pole, taken in infrared wavelengths, showed the planets southern aurora in magnificent detail.

Juno is scheduled to make 35 other flybys, each a bit farther from the “surface”. Jupiter has actually no surface in the accustomed sense, with layers of gas getting progressively denser from the atmosphere to the insides of the huge planet.

NASA officials said high-resolution images of cloud tops and poles will be released within a couple of weeks.

A planet of records

With a diameter (143.000 km) a tenth of that of the sun and about 11 times that of the Earth, Jupiter packs 2.5 times more mass than all the other planets of the Solar System combined. Jupiter outweighs the Earth 318-to-one. Jupiter is believed to have a solid core of rock and ice surrounded by dense “metallic hydrogen” extending to 78% of the planet’s radius, which, in turn, is topped by a supercritical fluidic inner atmosphere and a 1000-km deep outer atmosphere which is composed 90% of hydrogen, 9% helium and 1 percent of trace gases, mostly methane, ammonia, silicon compounds and lesser amounts of carbon ethane, hydrogen sulphide, sulphur, neon and oxygen.

Orbiting from an average distance of 778 million kilometers, Jupiter turns around the sun in 11.86 years. And despite its huge mass and size it spins around its axis in just under 10 hours. Because of this terrific rotational speed, clouds in its atmosphere, mostly formed of ammonia crystals, ammonium hydrosulfide  and water vapor, encircle the planet as bands moving in opposite directions and at different altitudes  with different speeds and in different  colors and their interaction cause the formation of persistent storms with wind speeds measured up to 400 kilometers an hour.

The “Great Red Spot” the hallmark of the planet is one such storm around for the past 500 years or so and large enough to encompass several Earths. The surface temperatures differ between -160 °C and -108 °C, depending on the gas density.

Jupiter has a total of 67 known moons, the largest of which known as Galilean moons being Europa, Ganymede, Io and Callisto.

Jupiter is thought to have formed at the outer reaches of the Solar system 4.503 billion years ago, that is, 40 million years before the formation of the Earth, and has subsequently migrated inward due to gravitational interactions with other gas giants. According to the established models of the Solar System’s formation, this migration disrupted the asteroid belt girdling the early sun, bringing the then “super earths” nearer to the sun  under a heavy bombardment by asteroids and comets, causing them to disintegrate and form the current inner solar system made up of smaller planets including the Earth. A second “late bombardment” then pummeled these newly formed planets and their moons, accounting for their pockmarked appearance with myriad craters large and small.