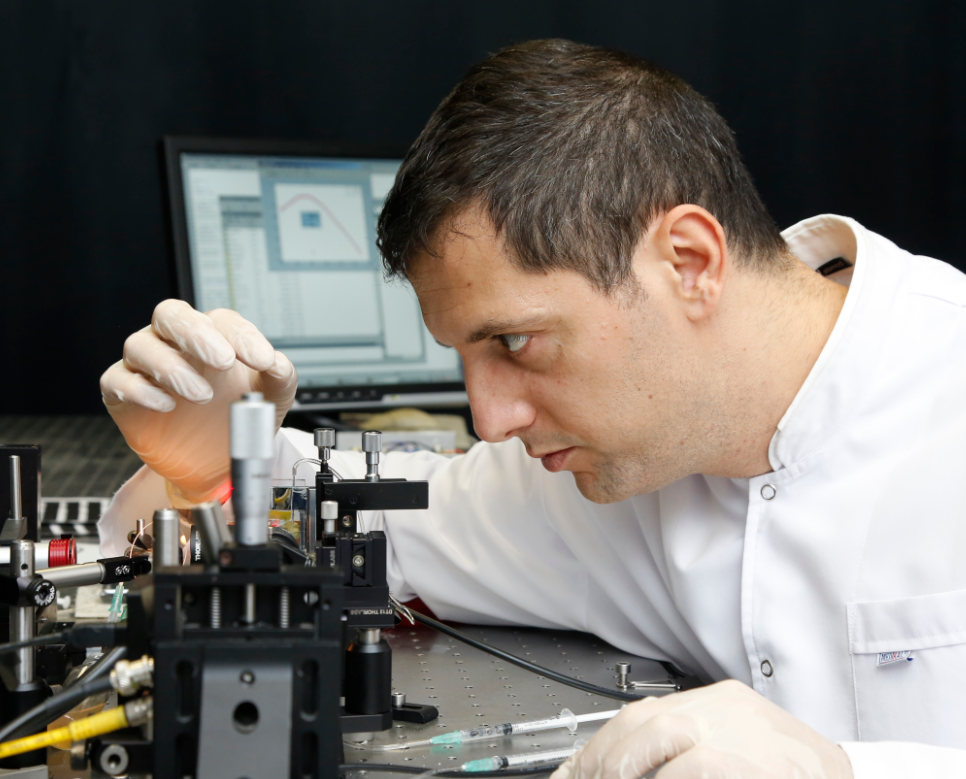 ERC project funding is provided to researchers who have established themselves as world leadersin their particular fields for five years and the proposed projects are expected to be ofground breaking nature. The 2.5 million- euro grant for Hakan Ürey’s project  carries the distinction of being the biggest project funding from the European Union. We asked him what ground-breaking technologies he intends to develop with the ERC grant.

Hakan Ürey- My ERC project concerns display or screen technologies which plays the major role in human-computer interactions. Among my objectives are developing technologies which enable displays that can be worn as spectacles, providing very wide angle vision and a true 3D perception. But for these, first we shall have to solve fundamental optical problems with novel approaches.

Let me first say a few words about some problems you probably have never been aware of with regard to screen technologies and 3D displays. Although a number of studies have proved that large screens are more conducive to productive work, the surge in mobile technologies in recent years has spawned a general trend in public to work with small screens (smart phones and tablet note-books). In other words, our quest for being mobile and accessing information from anywhere, overrules the benefits of sitting at our desks and working much more productively. Still, in the human-computer interactions, we experience three fundamental problems in connection with the display technologies of modern gadgetry: a seeming miniaturization cutoff in mobile devices due to impracticability of further reducing screen sizes despite the runaway shrinking of electronic components; constant employment of one or both hands for holding the device and writing; and the heavy consumption of power to operate and illuminate the screen.  While the screen accounts for more than half of the power used up by mobile devices, less than a thousandths of the light coming from the screen passes through the pupils of our eyes to form an image. Rest of the light only serves to illuminate the environment before dissipating. If, on the other hand, we could work with a wearable display in the form of spectacles or a contact lens, the proximity of the screen to the eye would boost the efficiency of light and vastly reduce battery depletion. Although a couple hundred microwatts of light would suffice for a very bright image, 2-4 Watts of power are currently used for screen illumination. In particular, as the screen size, or the field of vision which the screen covers in front of our eye grows, the battery consumption goes up in step with larger screens, making efficient use of light all the more important. A wide field of vision requires complex optical designs and high-precision lenses. That’s why the wearable screens have to have either a very limited field of vision confined to a corner of the eye like is the case with Google Glass, or have to be  quite bulky and heavy like the displays mounted on the helmets of combat pilots.

Another field of work of ours concerns the 3D displays whose popularity is ever increasing. And the main problem here is that while taking in a three-dimensional image, our eyes are unnaturally focused on two dimensional movie or TV screens. But in reality, when we look at a three-dimensional object coming towards us, our eyes turn inward their focus changes. The unnatural way of 3D viewing triggers symptoms like headaches and nausea, and diminishes the comfort of 3D vision. Another area we are working on is the development of a person-specific display technology which provides a sensation of real 3D depth.