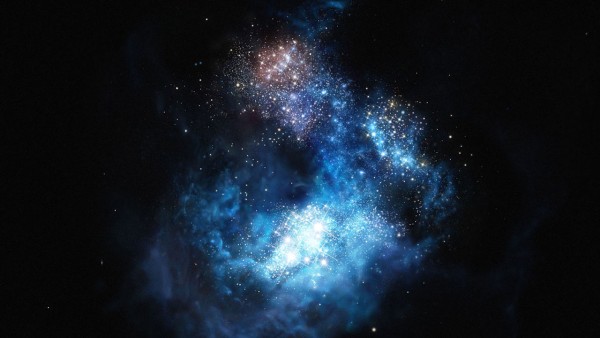 An international team of astronomers have found evidence for the presence of gigantic first generation stars predicted in the galaxy evolution models in one of the earliest galaxies discovered 12 billion light years away.

In the observations made with the Very Large Telescope (VLT) comprising four 8.2-meter telescopes at the European Southern Observatory at Chile’s Atacama Desert, the team led by Portuguese astronomer David Sobral, targeted the galaxies which began forming during the “re-ionization epoch” when the universe became transparent.

The observed galaxy shown as the artist’s conception at top, was named CR 7. One reason is connected with the phenomenon called the cosmological redshift which involves the shift of the wavelength (or color) of the light emitted by a receding source towards the longer (red) wavelengths in the optical region of the electromagnetic spectrum.  Called “redshift” in astronomy lore, it is also used as a measure of distance showing how far the emitting source is to us and hence, how far back in time they are, or how close they are to the Big Bang beginning. In short, the letter “R” in the observed galaxy’s name comes from this redshift. As for the “C”, it comes from the “Cosmos” Project at the California Institute of Technology (Caltech) which conducts studies concerning the evolution of the universe. Finally, the number 7 indicates the place (distance) of the galaxy in the redshift (distance) scale.

With the fortuitous alignment of  these  ingredients, the galaxy was named   ̶  presumably on suggestion from David Sobral of the Institute of Astronomy and Astrophysics of Lisbon University  ̶   CR 7, which is the nickname of Portuguese international Cristiano Ronaldo, the legendary striker of Spain’s Real Madrid.