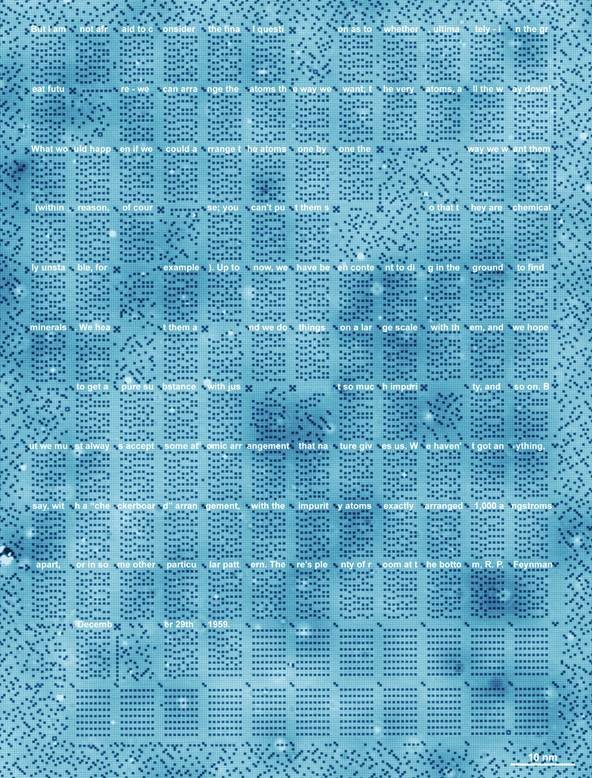 Single atom = single bit based hard disc has been produced

The huge volume of new data flooding  in every day in our modern age, totaling billion times billion bytes dictate ever-smaller data units in computer memories to be able store this deluge. Byte, the basic data unit nearly all the computer users are familiar with, is made up of eight bits, each representing either the 1 or 0 of the binary code

Now researchers at the Kavli Institute of Nanoscience at Holland’s Delft University have developed a 1 kilobyte (8000-bit) memory in which each bit is represented by alternating positions of single chlorine atoms. The feat is seen as the fulfillment of the 1959 prophecy of Richard Feynman, the Nobel prize physicist  regarded as the mastermind of nanotechnology, that one piece of information could be stored on single atoms, articulated in his famous lecture titled “There’s plenty of room at the bottom.”

With this storage intensity, all the books created by humans can be theoretically written on a single post stamp according to Sander Otte who led the study. Researchers note that the storage density of 500 Terabits (500 trillion bits) per 6.25 square centimeters is 500 times better than the best commercial hard disks.

The instrument the Delft team used in this remarkable achievement was a scanning tunneling microscope (STM) which could scan and image individual atoms on a surface as well as manipulating them with its pointed probe. The needle –shaped probe constructed the memory in 8-byte (64-bit) rectangular blocks with sizes smaller than 10 nanometer on a surface of copper atoms. The copper layer had identically spaced holes as the raster for chlorine atoms.

Each bit consists of two positions on copper atoms and a chlorine atom which can be moved back and forth between these positions “like a sliding puzzle”. If the chlorine atom occupies the upper position then there is a hole at the bottom and this configuration corresponds to 1. İf the hole is at top and chlorine atom is down, then the bit becomes 0.

Using this technique, the team coded a part of the Feynman’s lecture, including the phrase “There’s plenty of room at the bottom” on a space just 100 nanometers wide (shown in the photograph above).

Although praising its stability and scalability, Otte cautions against expectations for such memories showing up at data centers in near future, pointing out that the memory works in extremely clean  vacuum conditions and at liquid nitrogen temperature ( −195.79 °C). But even though there’s time to the atom-scale storage of data, the achievement is an important step taken in that direction, he concludes.