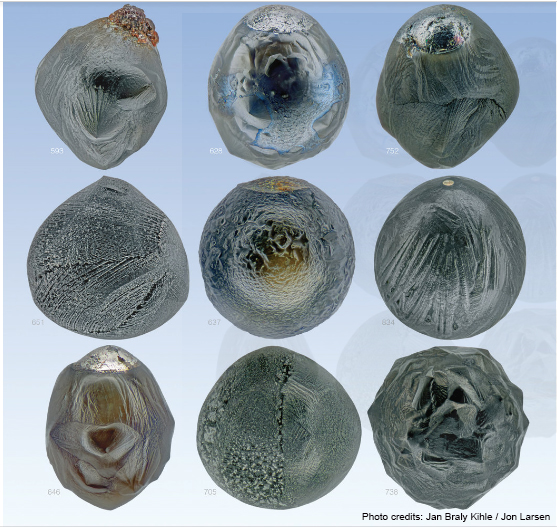 What do you think happens to the tons of cosmic dust particles that hit the Earth every day? Scientists finally solved the riddle. They are everywhere, scattered all around the world for billions of years.

An international team discovered that rooftops and other cityscapes readily collect the tiny speckles of extra-terrestrial dust. And this team is led by Jon Larsen, a noted jazz musician in Norway, who also happens to be an amateur extra-terrestrial dust collector for the past eight years. He is planning to publish a book called “In Search of Stardust: Amazing Micro-Meteorites and Their Terrestrial Imposters” in August, in which you will be able to find the secret of his extraordinarily successful hunts and 1,500 photographs of tiny dust particles taken through a microscope. The amazing photographs tell the story of how Larsen taught himself to distinguish cosmic dust from its terrestrial kin that arise from traffic, factories, construction sites, and other human activities.

The meteor showers that most of us enjoy watching consist of rocky extra-terrestrial visitors that often burn up entirely during their descent through the Earth’s atmosphere and sometimes strike the ground, but always sprinkling dust on their way down. More than 10 tons a day, and more than 4,000 tons a year. Most of this cosmic dust material has a miniscule size — barely the width of a human hair- but they are everywhere, from the air you breathe, to the vegetables you eat and the water you drink. Still, they are very hard to pin down.

Scientists have found micrometeorites mainly in the Antarctic, deserts and other remote places. They also tried to find them in urban areas, only to encounter tons of human contaminants and give up eventually. Larsen noticed that the scientists preferred to examine the particles’ chemical signatures rather than their physical appearance. He first started to learn how to classify and identify earthly contaminants, collecting samples from literally everywhere you can think of. And finally, two years ago, one of the particles he collected was confirmed to belong to outer space. After that, knowing what to look for, he found hundreds of them everywhere. His related article was published at Geology.