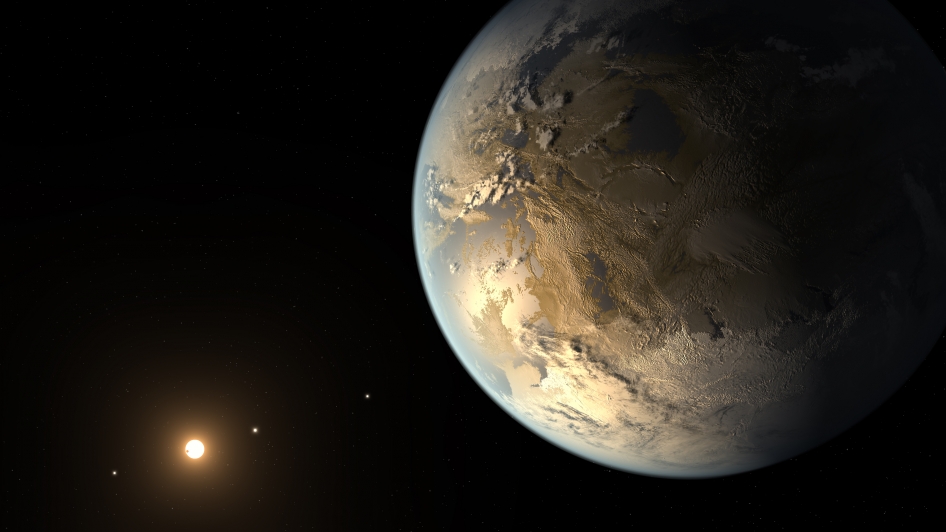 NASA scientists announced that mining of the vast data compiled by the now-defunct planet hunting spacecraft Kepler had bagged an extrasolar planet “closest so far in size to Earth”.

The planet, called Kepler -186f, is the fifth planet and the outermost, orbiting an M-class “red dwarf” star half the size of the Sun, about 500 light years away in the Constellation Cygnus.

Kepler -186f is just 10-percent larger than Earth and has an orbital period of 130 days, the report, published in the 18 April 2014 issue of Science said.  This places it in the mid of an imaginary disk called the “habitable zone” where the temperatures allow the presence of liquid water, the essential requirement for the life as we know it.

The other four planets, are about 1.5 Earth sizes, orbit much closer in and therefore their surface temperatures are too high for any life to flourish.  The orbital distances of the planets to their host stars are measured in Astronomical Units, or AU for short, one AU being the mean distance between the Earth and the Sun, or 150 million kilometers.

Kepler, launched in 2009 with instrumentation sensitive enough to flag the harder-to-detect small rocky planets with masses similar to Earth’s, has detected over 3500 planet candidates, large or small, by simultaneously monitoring 150.000 stars at Constellation Cygnus (the Swan), taking new readings every half hour. Of these, 961 had been confirmed as planets. Kepler’s planet finding spree ended in 2013 when malfunctioning gyroscopes robbed it of the ability of pointing to a fixed area (the Swan) in space.

Anticipating the accustomed media hype over the announcement, NASA scientists cautioned that a planet’s location in a habitable zone does not mean that it’s actually habitable, with several other factors besides suitable temperatures have to combine to support the emergence and evolution of life. “We consider this planet more of an Earth cousin than an Earth twin,” says Elisa Quintana, an astronomer at SETI Institute and NASA’s Ames Research Center who led the team that made the discovery.

Despite the known size of Kepler- 186f, the mass of the planet has not been determined so far, although such sized worlds are assumed to be rocky.

Another critical factor, again unknown in this case, is the composition and thickness of the planet’s atmosphere, as too thick ─and heavy─ atmospheres and greenhouse gases trap heat and make the surface hostile to life.

Still another is the type of the host star. Red dwarf stars, which are smaller (between 0.1 and 0.5 solar mass) and cooler than the Sun (a G-class yellow star), make up about 70 percent of the Milky Way’s star population. They have far longer lifetimes than the Sun (smallest ones will keep going for trillions of years compared to Sun-like stars’ lifespan of about 10 billion years) ; so any life that will sprout at a planet circling one will have lots of time to evolve.

But being a lot less massive, their output of energy (mostly in infrared wavelengths compared to Sun’s predominant visible light radiation) is also considerably weaker. The radiation falling on to Kepler-186f is a third of the energy Earth receives from the Sun. Astronomers estimate that someone standing on the side of Kepler 168f facing the star on high noon will see the sky as how it looks towards the dusk on Earth.

Perhaps more importantly, “red dwarf” stars are less stable compared to “biggies” like the Sun frequently sending out huge flares which can potentially sterilize any nearby planet.