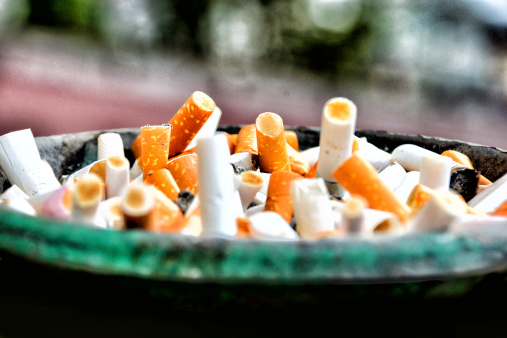 Used-cigarette butts is an unwanted gift from the tobacco industry to the environment, beyond the ones for human health. Besides being a problem municipalities and touristic establishments are struggling to cope with, these butt which litter parks, streets, picnic areas or beaches, insult the eyes of  the non-smoking public.

Did you know that 5.6 trillion used cigarette butts, adding up to nearly 770.000 tons are discarded throughout the world every year? No?

Then here’s another thing most of us probably did not until now. That is, until a group of South Korean scientists recently announced: these obnoxious eyesores which we try not to see or take delight in kicking with the toe caps of our shoes  are perfect raw materials for applications in electric-electronic , automotive and a host of other industries.

What the Korean researchers disclosed was that they had produced from discarded cigarette butts a superbly performing material which can be used for energy storage in computers, handheld devices, electric vehicles and even wind turbines.

The study, published in Institute of Physics journal Nanotechnology, showed that the cigarette butt-derived material was superior to the commercially available carbon, graphene and carbon nanotubes.

Scientists hope that besides its potential use as coating for electrodes in supercapacitors, electromechanical components which store and release electrical energy in huge quantities, the material will also provide a green solution for the growing environmental problem caused by the toxic and non-biodegradable used cigarette butts.

Professor Jongheop Yi of the Seoul National University, a co-authorof the study, says their work has proved that used-cigarette filters could be converted to a carbon-based high-performance material through a simple, single-step  process.

Its cheapness, large surface area, high electrical conductivity and long-term stability make carbon the most preferred material in the manufacture of supercapacitors. Everywhere in the world, researchers are focused on studies aiming to improve such characteristics of supercapacitors as energy density, power density and cycle stability while at the same time reducing their production costs. For their part, the Korean scientists converted fibers of cellulose acetate, most widely used material for cigarette filters, into a carbon-based material with multi-sized pores by using a one-step burning technology called pyrolysis.

“A high-performing supercapacitor material should have a large surface area, which can be achieved by incorporating a large number of small pores into the material. And a combination of different pore sizes ensures that the material has high power densities, which is an essential property in a supercapacitor for the fast charging and discharging,” explains Prof. Yi.

To measure its efficiency in adsorbing the electrolyte ions (charge) and releasing them (discharge), the produced material was attached to an electrode in a three-electrode test apparatus. The results showed that its energy storage capacity was superior to those of  commercially available carbon and such nanotechnology staples as graphene and nanotubes.