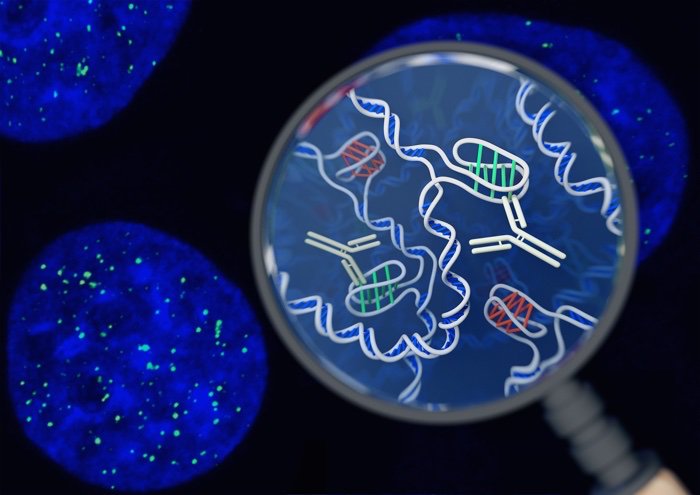 A previously discovered different DNA structure has just been observed in human cells for the first time. The so-called structure, referred to as “intercalated motif” or “i-motif”, demonstrates that our genetic code has a far more complex structure than just double helix.

The study by the scientists from Garvan Institute of Medical Research in Australia is published in Nature Chemistry and shows that the DNA, which most of us perceive as a double helix, may actually be found in very different forms in our cells. The newly observed structure is defined as a twisted knot.
A four-stranded knot
The intercalated motif (i-motif) structure was first discovered in the 1990s, but couldn’t be observed in a living cell until now. Marcel Dinger, co-leading the research identifies the i-motif as a four-stranded knot of DNA: “In the knot structure, C [cytosine] letters on the same strand of DNA bind to each other – so this is very different from a double helix, where 'letters' on opposite strands recognise each other, and where Cs bind to Gs [guanines].”

According to Mahdi Zeraati, first author of the new study, i-motif is only one of the many DNA structures that are not found in the double helix form. These unconventional forms include A-DNA, Z-DNA, triplex DNA and Cruciform DNA.

Another kind of DNA structure, G-quadruplex (G4) DNA, was first visualised in 2013. Zeraati and his team used the same technique to develop an antibody fragment (iMab) that could specifically recognise and bind to i-motifs. And this antibody highlighted the locations of i-motifs in the cell with an immunofluorescent glow.

What excited the researchers the most was that the green glows representing the i-motifs kept appearing and disappearing over time, which showed that they kept forming, dissolving and forming again. This observation supports previous research that suggested i-motifs may be found in areas that regulate genes, such as the chromosome ends called "telomeres" that are thought to play a role in aging and promoter regions in charge of turning genes on and off. Scientists will now work on understanding the role of these structures in our biology.

"There's so much of the genome that we don't understand, probably like 99 percent of it," Dinger says. He is hopeful that seeing DNA folded like this in living cells will help unravel the mysteries of our genome.