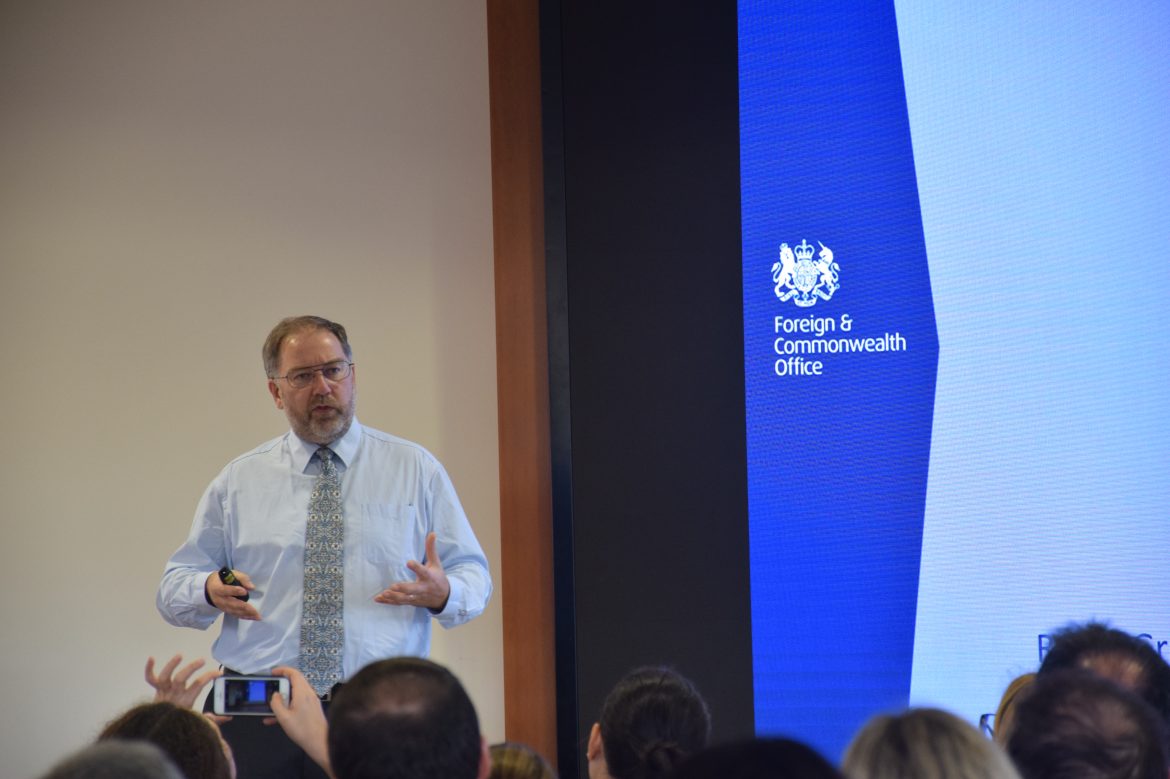 On 28 September 2017, Koç University hosted a talk on campus by Robin Grimes, Chief Scientific Adviser for the UK Foreign & Commonwealth Office and Professor of Materials Physics at Imperial College London. In this exclusive interview with KURIOUS, Professor Grimes shares insights into his role as “science diplomat”, and talks about science education, energy research, and how to minimize the risks associated with nuclear energy.

As a specialist in the behavior of materials for energy applications, Professor Grimes’s research encompasses nuclear fission and fusion, fuel cells, batteries, and solar cells. He also a member of the UK’s Scientific Advisory Group for Emergencies (SAGE) that provides official advice during national and transnational emergencies.

How does your role support science education around the world?
The idea here is something called “science diplomacy”. When you make a foreign policy decision there is often going to be some data or engineering or science that you need to consider when you’re making that decision – in other words evidence in foreign policy making or science in diplomacy. A second aspect is we need to ensure that our scientists have got the right agreements available to them so that they can get on with doing their job – so that is the idea of “diplomacy for science”. And then finally there’s something called “science for diplomacy”; not science in diplomacy but science for diplomacy. That’s the idea that scientists can work together despite situations that may be politically difficult. It’s a confidence building process, but it also allows us to understand the cultural context and start to open pathways. So, these are the three facets of science diplomacy.

What I would like to see is more opportunities for students to spend time at different institutions so that they can learn about those different cultural aspects. I think that would be really impactful. I was an overseas student myself and I gained tremendously from the experience.

As an adviser for foreign policy, what kind of energy technologies should be top of our research agenda?
I would never tell a country what I think it ought to do; however, what I would say is that most countries need a mix of different energy sources because energy resilience depends on having flexibility in the energy generating portfolio. The details depend on the particular country; for the UK, offshore wind is very important because we have shallow seas with lots of very consistent winds. We rarely get hurricane force winds and equally there’s usually some wind, so offshore wind is a good one for us. But we don’t have that much in the way of mountains so we can’t derive much hydroelectric energy. I have a personal opinion that hydrocarbons are far too valuable to burn, because we need them for making polymers and deriving chemicals that we use in industry.

From my personal point of view, burning them to generate electricity (be that coal, gas, or oil) is frankly mad. I’m not saying we shouldn’t exploit hydrocarbons as a mineral resource, I think we should, but we shouldn’t be using this for generating energy. We should be generating chemistry and products like that. Then we would see hydrocarbons last a couple of thousand years – but the way we’re exploiting this resource at the moment we’re going to run out in a couple of hundred years. Remember, plastic products and polymer coatings are derived from oil products. A nylon carpet is derived from oil products; we’re surrounded by oil products. When the oil runs out, we’re going to have much more difficulty generating these products. As a consequence, nuclear energy is a good option, but it depends on where that nuclear energy is being generated because there are consequences. There is a long-term problem with nuclear waste; we’ve got scientific solutions but we need to turn those into engineering solutions to deal with the waste. Also, the reactors have to be seismically robust enough to deal with earthquakes, which in Turkey is a particular issue that your engineers are coping with. And you’ve got to have the right sort of population density and requirements of industry. So, for some countries nuclear energy is just not a very good option. It doesn’t make any sense at all but for others it’s a good option. It just depends on which country.

In a world where nuclear power stations seem to be increasingly at risk of natural disasters such as hurricanes or earthquakes, what suggestions would you make to minimize the risk of a nuclear catastrophe, such as at Fukushima?
Again, this is a personal opinion; I would say that the hurricanes have demonstrated that if you have a plant that is designed to deal with that challenge, then the nuclear reactors can be shut down safely. In fact, in one case the nuclear reactors didn’t even shut down, they kept generating electricity throughout the storm, because they had been designed to do that [the two nuclear reactors at the South Texas Project plant near Houston remained operational after Hurricane Harvey struck the south coast of Texas in August 2017– ed.].

It’s all about the engineering. It’s about appropriate safety to an appropriate challenge. And so seismic qualification of reactors can be acheived. It means you have to pay attention from the very beginning and you have to be very clear of what the challenge is in terms of the reactor.

In terms of nuclear waste, as I’ve already said, it’s not a scientific challenge. We know how to deal with nuclear waste. It’s an engineering challenge and it’s a societal challenge. People have to have confidence in the nuclear reactor build and the solution for the waste etc. And that’s proved very difficult in a number of countries. In the end, if the public decides that they don’t feel that nuclear energy is appropriate for the country then that’s their right. But what we’ve got to do as a nuclear engineers is ensure that the facts are clear and that there is a decent understanding of those facts.

For example, any time you do anything in terms of an engineering structure there is risk associated with it. It could be the mining of the material that you made the cement out of, or it could be the production of the steel – even before you even get anywhere close to the construction phase. So there’s always risk, and it’s about the balances of those risks. But it’s also about people understanding and accepting the balances of the risk as well; again that’s a societal issue.

Do you believe there is a genuine danger with the current North Korea nuclear crisis? Is there a way to prevent further crisis?
This is an issue for the international atomic energy agency. The international atomic energy agency (which is an agency of the UN), the UN, and the UN high councils have made it very, very clear that North Korea is in violation of a whole series of different treaties and resolutions. And that’s not acceptable. As a consequence, their actions are absolutely condemned by the UK.