Skip to content
Homepage ARTICLES What’s The Universe Made Of? 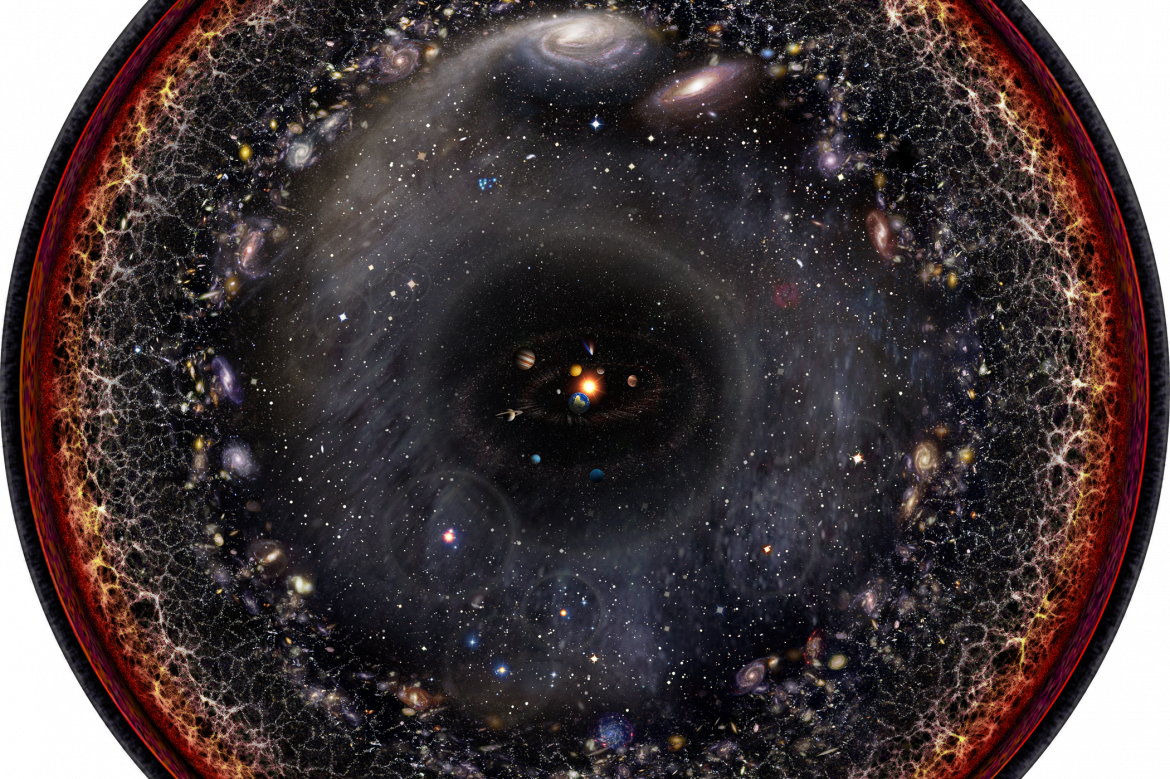 What’s The Universe Made Of?

The universe, with all its dust and gas, galaxies, stars, planets, black holes, and almost infinite emptiness, is an entity beyond human imagination. But what’s at least as enchanting as the universe itself is the mankind’s struggle to understand and comprehend it all without being “overwhelmed”. One of the most awe-inspiring advances in space research has been the mankind’s scientific attainment of the knowledge on time and space that is physically impossible to reach. Thanks to advances in technology, we are now able to make deductions about the origins of the universe by means of estimations, simulations, and models based on our observations of the deep space. All that data has enabled a number of studies on many subjects including the formation of celestial bodies, determining and mapping their locations, and even the dark matter we cannot see.

Roen Kelly’s infographic showing the matter-energy distribution in the universe, prepared for the Planck mission of European Space Agency (ESA)

Until about 30 years ago, astronomers thought that the entire universe was made of “baryonic” matter, or the “normal” matter that spawned the trees, rocks, and the humans. Now we know that the universe is full of an indeterminable type of matter; another matter, different from electrons, protons, and neutrons. According to the data supported by the observations of NASA’s Wilkinson Microwave Anisotropy Probe in 2010, and later by ESA’s Planck satellite telescope, only about 4,9 per cent of the universe is composed of stars, planets, asteroids, comets, and other celestial bodies consisting of normal matter. The “dark matter” that we know exists but we cannot observe accounts for 26.8 percent of the universe, while another 68.3 percent of it is occupied by “dark energy” that affects the accelerated expansion of the universe. In fact, we have extremely limited scientific data on the dark matter and the dark energy that make up about 95 percent of the universe. Because scientific data is insufficient to explain what this matter and energy consist of, and how the system works, the word “dark” is used to mean that it cannot be explained and to indicate its difference from normal matter.

The KPAC, SLAC simulation map by Tom Abel and Ralf Kaehler, for the “Dark History” exhibition of the American Museum of Natural History (AMNH). This simulation frame shows filaments of dark matter dispersing like a spider web around the universe, with yellow dots representing planets, galaxies, etc. made up of normal matter.

Based on the 3D models obtained from the Hubble Space Telescope, the number of galaxies in the observable universe is estimated to be 2 trillion, and the number of stars in these galaxies is about 1022 (1 septillion). All these celestial object in the universe, which we may assume are infinite, are in constant motion. They follow specific orbits due to gravity. Astrophysicists predict that a cosmic system in constant motion must be kept together by a force. And the dark matter provides the gravity that hold the galaxies all together. Unlike atoms, this matter does not radiate or absorb light –it only reveals itself by the force of gravity it exerts. In 2008, two independent research groups from Max Planck Institute and NASA, obtained similar results from analysing intergalactic space: Dark matter covers the entire universe like a spider’s web, constituting the universe’s backbone.

The simulation generated by Virgo Consortium on the supercomputer named Millennium Run in 2005, in Max Planck Institute. The modelling shows the distribution of dark matter in the universe.

Dark matter is presumed to be spreading in the space between clusters of galaxies, in the form of extremely heated oxygen and hydrogen. These webs of oxygen and hydrogen that are composed of normal matter couldn’t be determined until 2008 because the matter was too hot to be observed in the visible spectrum, while it was too cold to be observed in X-rays. Clusters of galaxies are connected to each other by the atoms of hydrogen and oxygen, which shrink and ionize in high temperatures. These can now be observed only in the X-ray spectrum through NASA’s Hubble Space Telescope (HST) and Far Ultraviolet Spectroscopic Explorer (FUSE) satellite. In fact, what is observable is the effect created by the gravity of this spider web. Therefore, the galaxies are not scattered randomly in the universe, they are spread on the fine streaks of the spider web, created by dark matter. In order to gain more insight about the still-mysterious dark matter, a number of studies are simultaneously being carried out, including the experiments in CERN’s LHC particle accelerator.

Dark matter, being one of the biggest unknowns of cosmology, is a kind of theoretical energy that is assumed to cover the entire universe. The existence of dark energy in the universe is an ongoing subject of debate among astrophysicists, because our knowledge about dark energy is even less than our knowledge on dark matter. Unlike dark matter, this energy is also defined as a kind of “anti-gravity force” that accelerates the expansion of the universe, or as the energy of [vacuum of] space.

Just until 1920’s, it was presumed that the Milky Way constituted the entire universe and everything in the universe was stationary. But in 1923, based on his observations, Edwin Hubble discovered the existence of other galaxies, and on top of it, that these galaxies were moving further away from each other, meaning the universe was expanding. Decades after his observations, in 1998, Hubble Space Telescope witnessed and observed supernovae explosions, and we learned that the universe’s expansion rate was increasing.

Astronomers don’t know how big the universe is, but the world of science widely accepts that the universe was formed 13.8 years ago through “Big Bang”, from an infinitely small and infinitely hot ball of energy, and expanded faster than the speed of light by “inflating” in mind-bending fractions of a second. However, in a universe that is expanding by inflation, there is a limited region of space that we can be informed of because its limits can be determined by the areas where light can reach. This region of space where we can observe and gather information from, is called the “observable space”. According to estimations where the universe’s age is multiplied by the speed of light, the observable space has a diameter of 46 billion light years. All the 2 trillion galaxies, about 1022 (1 septillion) stars, along with the clouds of gas consisting of hydrogen and helium between all the celestial objects make up for only 4.9 percent of the universe that is composed of normal matter. And thus, in order to start comprehending the scale of the universe, and to understand what kind of a system the Earth is a part of, it might be proper to start with the questions of what the universe is made of, and what it contains.