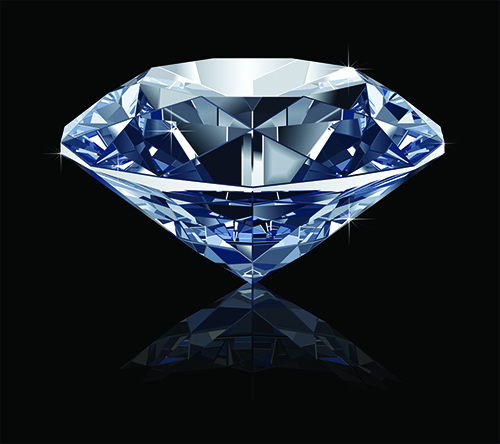 Is your Diamond Ring Defective? Rejoice!

If you have a diamond ring on your finger, it’s probably imperfect, even though you may not be able to tell. But don’t set out to break off the engagement just yet! Perhaps you should even thank your prospective partner, as you may be carrying the data store of the future on your finger.

A report published in the Science Advances journal has revealed how diamonds can be utilized for long-term data storage. Today, a tiny diamond half the size of a grain of rice and thinner than paper can store hundreds of times more data than a DVD can. Considering the fast-growing mass of data produced in the world, this capacity may not sound like much, but physicists will be able to store the equivalent of a million DVDs on one diamond – and perhaps more – in the future.

Researchers around the world are working hard to store the mountains of data produced everywhere as people take selfies or process credit cards. Ideas such as DNA, holograms and old-fashioned magnetic tape are among those in consideration. In fact, the use of diamonds isn’t new to the memory game either: it has previously been proposed for quantum data storage. But this time, data is to be stored in the well-known, more conventional way: as zeroes and ones.

The project in question begins with a class of tiny imperfections on the atomic scale on that “perfect” diamond on your finger, known as the nitrogen centers. These defects form when a rebellious nitrogen atom gone astray – or a few – slide shadily into the carbon structure of the diamond. When the carbon atom adjacent to the nitrogen atom is substituted, we get the perfect empty space to stash our data into.

A team of physics researchers from New York City University have used laser rays that can push or draw an electron like a magnet to encode and decode information in these tiny spaces. They succeeded in reading data the way a computer reads zeroes and ones. The experiment used laser rays to denote the existence or absence of the electrons to corresponded to the binary numbers.

According to Jacob Henshaw, a graduate student from the team, the concept here differs from reading a DVD, even though they both use light to read data: “A DVD is like a two-dimensional puzzle. The diamond technique we use here is more like a three-dimensional model”. In contrast with DVDs, which have only a single layer, data can be stored on multiple layers of the diamond, like a huge stack of DVDs. The researchers state that “This storage technique works differently than magnetic hard disks, because diamonds are forever.” Every time you access your hard disk or record data on it, the material on the magnetic platter wears away and can become unusable in five to ten years. But with diamonds, the “defects” do not change, and if you don’t delete it, your data can last as long as the diamond itself.

According to Siddharth Dhomkar, who heads the research team, with the technique, “You cannot lose your data. It will last forever.”

But veterans of the data storage industry are skeptical. They suspect that this novel form of data exchange may not make it out of the laboratory, and worry that it may lead to data loss and high costs, even though the diamonds to be used are defective.

The researchers, on the other hand, claim that industrial diamonds that cost about 150 dollars are the cheapest experimental substance they have used so far. And the concept they have developed is not valid for the material they used in the laboratory only, but for any material with identical defects, including diamonds: “As diamonds get bigger, so do their defects, and we get more space for data storage”, states Henshaw; “Your diamond ring will carry your wedding photos too one day. But don’t go walking in daylight, as your photos may be erased!”