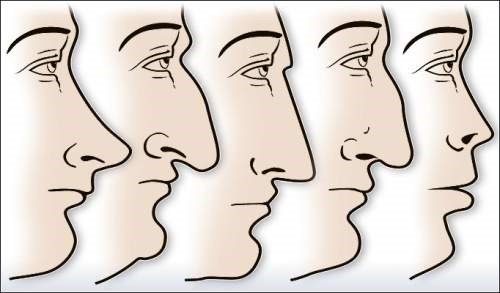 Pointing up, down, narrow, flat?

A study based on data from over 6,000 people of different ancestry across Latin America concludes that four genes are responsible for nose shapes. The study, authored by researchers from University College London has also identified a fifth which affects the protrusion of chins.

Findings published in the May 19 issue of Nature show that DCHS2, RUNX2, GLI3 and PAX1 are responsible for the pointiness and the breadth of the nose, while EDAR controls chin protrusion.

According to researchers, facial features of people are shaped by genetic factors which partly depend on the influence of the environment on the evolution of human genome, as seen, for instance, in the narrower nose of Europeans which is explained by an adaptation to a cold and dry climate.

The team studied 14 facial features and genomes of 5958 people chosen from a larger sample covering people from Brazil, Chile, Colombia, Mexico and Peru.  50 percent of the participants had European ancestry, 45 percent were native Americans and five percent were of African descent.

GLI3, DCHS2 ve PAX 1 are genes which drive cartilage growth. Of these, GLI3 and PAX1 were found to determine the breadth of the nostrils, DCHS2, the pointiness of the nose while RUNX2 controls the width of the nose bridge.

Researchers have also concluded that GLI3, DCHS2 and RUNX were selected more recently in modern humans than archaic humans like Neanderthals and that GLI3 had a particularly rapid pace of evolution.