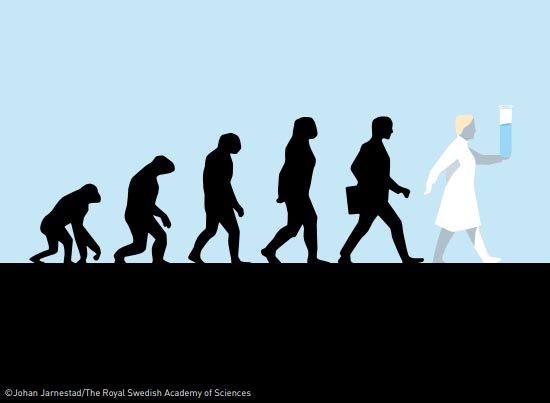 Nobel Prize in Chemistry this year has been awarded to three scientists that used the principle of evolution to produce new chemical compounds. The Prize was shared by two studies, the first “directed evolution” of enzymes, and the usage of viruses to evolve new proteins and antibodies.

Chemistry first took its place among the Nobel Prizes in 1901. Since then, 177 people became Nobel Laureates in this field, with only 4 women -until this year. Professor Frances H. Arnold just became the 8th female researcher with a Nobel Prize in chemistry.

Dr Arnold is a professor of chemical engineering, bioengineering and biochemistry at the California Institute of Technology. Her Nobel-awarded work was on conducting directed evolution of enzymes (proteins that catalyse chemical reactions). She conducted the first directed evolution in 1993 and has refined her methods it since then. Her enzymes have been used in the production of many things -including biofuels, medicines and laundry detergent- and they have taken the place of toxic chemicals.

Dr Arnold tried to alter an enzyme called subtilisin in order to make it accelerate changes in an organic solvent. And thus, she made random changes in the genetic code of the enzyme and introduced the mutated genes to bacteria that can create different types of subtilisin. By selecting the best performing type and continuing to mutate that gene variant, she managed to obtain the very best version of the enzyme.

While Dr Arnold received half of the Nobel Prize with her research, the other half was shared by two scientists: George P. Smith of the University of Missouri, and Gregory P. Winter from the MRC Laboratory of Molecular Biology, Cambridge.

Triggering the production of new proteins

Dr Smith received the Prize for developing a method called the “phage display”, in which a bacteriophage (a virus that infects bacteria) can be used to evolve new proteins. Smith, just like Dr Arnold, altered bacterial DNA by inserting a specific protein into the genetic code of a bacteriophage.

…and recreating antibodies
Dr Winter’s awarded research was on evolving new antibodies through phage display to combat autoimmune diseases and in some cases, may cure metastatic cancer. This study does resemble Smith’s but differs from it in a few important points. This method was used to create antibodies that can neutralize toxins, cure cancer that has spread and counteract autoimmune diseases. The first new drug that uses this method was approved in 2002 and is used to treat psoriasis, rheumatoid arthritis, and inflammatory bowel disease.