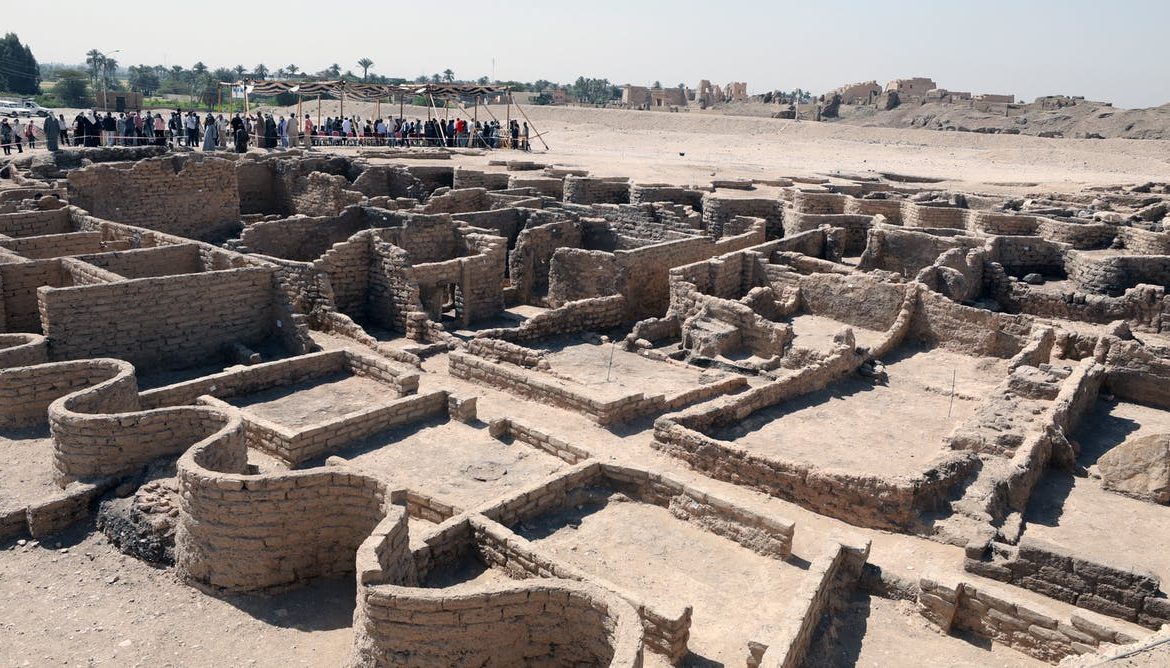 Exciting News from the Mysterious Past of Egypt

The mysteries of ancient Egypt continue to unfold. The ancient settlement of Aten was discovered near Luxor, formerly known as Thebes, in September last year. The settlement dates back to about 3400 years, and is located in an area between the tombs of Ramses III and Amenhotep III. With its impressively well-preserved ruins, the discovery of Aten, the “lost golden city” is said to be one of the most important finds since the unearthing of Tutankhamun’s tomb by the renowned British archaeologist Howard Carter in 1922.

Before moving on to the details of this long-lost city’s settlement, it may be useful to take a look at the political developments of its own era, because we are talking about a period of change, with some of its details still unknown. During that period, when the Egyptian Civilization lived its most glorious days, interesting events took place, affecting the entire of Egypt, albeit for a short time.

In the Eighteenth Dynasty of Egypt, pharaoh Amenhotep III, who ruled between around 1386 and 1353 B.C., left behind a very powerful and wealthy state when he died. Amenhotep III was crowned when he was still a child. According to many, Egypt lived the most glorious days of its history in economic, political and cultural terms during the 38-year reign of Amenhotep III. The pharaoh also had close relations with the priests of Amon, who were quite powerful politically and economically at that time.

His son, Amenhotep IV, ruled the state alongside his father during the last 8 years of his reign and claimed the throne after his death. In the following few years, the new pharaoh took several steps that changed the entire religious and cultural structure of Egypt, as well as its political structure. Along with Queen Nefertiti, Amenhotep IV abandoned and excommunicated all the traditional Egyptian pantheon except for one, the sun god Aten. He proclaimed Aten the only one and true God, and changed his name to Akhenaten (meaning “dedicated to Aten”). He also left the capital Thebes and moved to a new city he built further north: Akhetaten (modern “Amarna”).

Now known as Akhenaten, he also oversaw an artistic revolution that transformed Egyptian art from stiff, static and uniform to softer, animated and detailed depictions in paintings and sculptures. His own depictions also display features that can be called feminine, or even androgynous as a referral to Aten, considered both the mother and father of humanity.

Exactly why Akhenaten opposed religious and cultural traditions so strongly and led a revolution in every sense is unknown. One reason might be to rule out the political and economic power of the Amon cult, with which his father was closely connected. No matter what the reason was, things quickly returned to how they were after the death of Akhenaten, whose reign lasted 17 years. With the succession of his son Tutankhamun, the new capital was abandoned, and almost all traces of Akhenaten were systematically erased from history and records, even the capital’s name. So much so that it was only with the discovery of Amarna in the 18th century that this name resurfaced. In addition to adjectives such as mysterious, revolutionary, and idealist, Akhenaten was known as an infidel, heretic, fanatic, and even insane. In any case, he is accepted to have left an important mark in history.

The newly unearthed settlement, Aten, is thought to provide some very important clues as to what everyday life was like under the reign of Amenhotep III, the father of Akhenaten. The remains, which were discovered in September last year and shared with the press just recently, offer a wide range of findings from everyday items (gems, jewelry, ceramic pots, etc.) to mudbrick walls that are still standing, from items related to metal and glass production to the living quarters of workers, from administration buildings to rock tombs, and even a bakery. Although the actual size of the city is yet to be discovered, seals bearing the name of Amenhotep III suggest that the place was still inhabited in the 37th year of his reign, that is, when he ruled the state with his son towards the end of his life.

When Akhenaten came to power and overturned all traditions, this place was abandoned to its fate. A huge boon for archaeologists. Scientists working at the excavation site report that all the streets, walls and structures are amazingly well-preserved, creating the feeling that you may encounter an ancient Egyptian at any moment. Sounds like every archaeologist’s dream!

Tutankhamun, who came to power after his father Akhenaten, rejected his father’s reign and changed the capital once again; although not to Thebes, but a newly established capital called Memphis. However, there is evidence that he also began reusing the city of Aten. In fact, the settlement layers show eras of use all the way into the Coptic Byzantine period during 300-700 A.D. Afterwards, the city was left at the mercy of desert sands, and remained hidden until today.

When archaeologists began to work at the site in September last year, they certainly did not expect to encounter anything like this. The expectation was to find a building filled with funeral and burial items dedicated to Tutankhamun. A few weeks after the excavation began, however, the researchers saw mudbrick walls stretching in all directions. In the past seven months, several neighbourhoods consisting of residential buildings, administrative areas and industrial areas have seen the light of day.

Although still unknown exactly why Aten was abandoned during the reign of Akhenaten, archaeologists expect to obtain a lot of data about the period of his father, Amenhotep III. Having discovered a number of chambers carved into the rock, similar to those found in the famous Valley of the Kings, home to the tombs of many pharaohs, the archaeologists are hopeful. The discovery is still new, and the work has only just begun, so we can be sure to hear the name Aten over and over in time, as the excavations continue.

In addition to all these developments, Egypt recently hosted another event related to its archaeological inheritance. The Egyptian Museum in Cairo, the capital of Egypt, was moved to the newly built National Museum of Egyptian Civilization in another part of the city. The most interesting part of this relocation was the parade for 22 pharaoh mummies. The mummies of 4 queens and 18 kings, including Amenhotep III, were transported to their new home in an event called the “Golden Parade of the Pharaohs”. One by one, the mummies were transported to the new museum under special security arrangements, in chronological order according to the dates of their reign, in vehicles fitted with special shock-absorbers to protect the mummies. The vehicles were decorated to resemble the chariots used in Ancient Egypt. In order to further protect the mummies against external conditions, roads along the route were repaved, and the mummies were placed in boxes filled with nitrogen gas.

The museum is expected to open its doors to visitors next month. This is a truly promising renewal for Egypt, which has been deprived of its usual tourism income due to the political instability in the past years and the COVID-19 pandemic. The new museum has been designed and arranged in such a way that visitors will experience the illusion of being in the Valley of the Kings in Luxor. In addition, a new Grand Egyptian Museum, which will house the Tutankhamun collection, will open next year near the Great Pyramids.