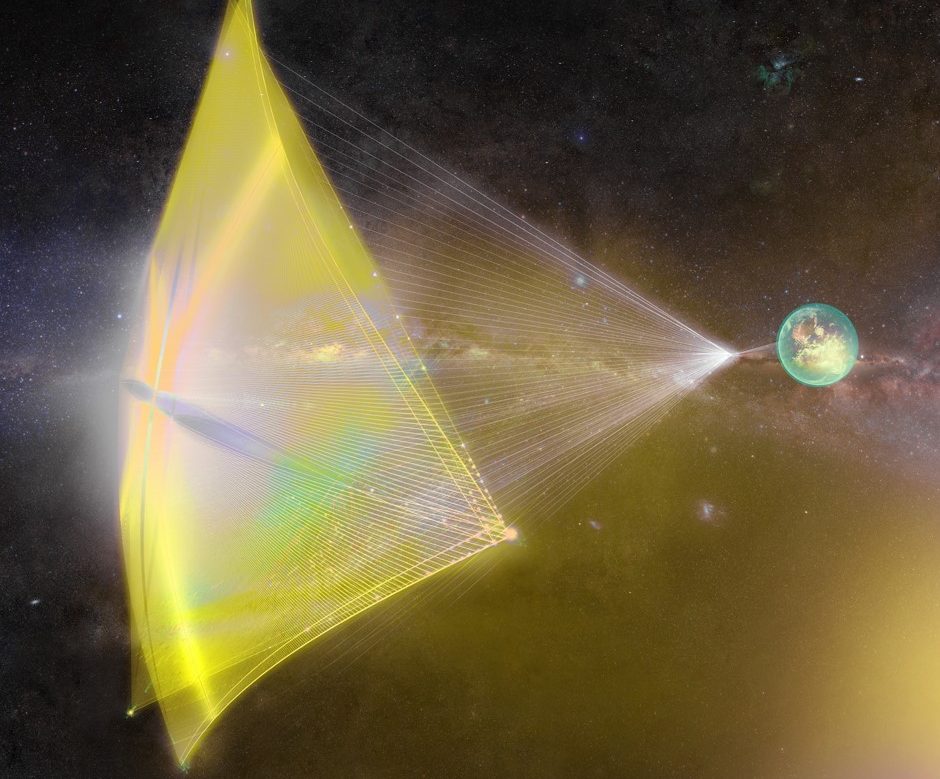 But there’s a problem…

Spaceships are somewhat small – weighing less than a gram! The one envisaged by  Russian billionaire Yuri Milner who ceremoniously unveiled a project to reach the Sun’s closest neighbor, Alpha Centauri  40 trillion kilometers away in just 20 years – endorsed by some leading physicists – is fittingly described as a “spacechip”, or better still, “spaceship-on-a-chip!”

Scientists with less flair for unfettered mental roams in the cosmos estimate the time it will take to reach the nearest star with the current technology in tens of thousands of years. But Milner, who has earned his fortune by well-placed investments to social media and his reputation as a patron of science by handsome grants and prizes he has set for futuristic schemes, sees his ambitious project named “Breakthrough Starshot” as being within the reach of today’s technology, or that of the near future.

The project foresees a fleet of thousands of milligram-mass “nanospaceships” fitted out with tiny cameras, photon-thrust motors, ion propulsion, navigation and communication systems.  Milner’s project team is confident that the described “Starchip” could be constructed at a total weight of 370 milligrams today, with the weight further reduced to 220 milligrams in 2030. A starchip could be produced for no more than the price of an iPhone with today’s cellphone technology, the Russian billionaire asserts.  He believes that the project can be realised after a generation, “provided certain engineering hurdles are overcome.”

Among supporters of the project are such physics community notables as  Stephen Hawking, Freeman Dyson of Princeton University, Avi Loeb of Californiia Institute of Technology, as well as Pete Worden, a former director of NASA’s Ames Research Center.

In the project which Milner detailed at a press conference in New York, each chip in the fleet to be sent to Alpha Centauri system will be powered by a sail several meters wide. To keep its weight down to a few grams, the sail has to be made of a material only a few hundred atoms thick.

A square-kilometer array of hundreds, or perhaps thousands of lasers collectively producing 100 gigawatts of power will run a few minutes every day to accelerate the starships one by one.

The fleet, made up of craft thus accelerated to a fifth of the speed of light (that is, to 60,000 kilometers per second will zoom past the Alpha Centauri system after 20 years, sending the data it gathers about the stars of the system and possible planets back to the Earth with a laser beam to be reflected off the sail to increase its power.

But because of the relativistic speed of the nanofleet, the images gathered will be highly distorted. “But, at least we would have done something other than just looking at the stars” in Milner’s words.

Alpha Centauri is a triple star system composed of α Cen A, a yellow star of spectral class “G” like the Sun but slightly larger, α Cen B, a “K” class orange dwarf somewhat lighter and cooler than the Sun, and α Cen C, or “proxima Centauri” as it is better known”, which is a far less massive, cool “M" class “red dwarf” orbiting the larger two members of the system.

The announced discovery of a planet orbiting α Cen B made in 2012 was not confirmed by other observations and was later withdrawn.