Skip to content
Homepage Antropoloji These Are Not Your Ordinary Nobels 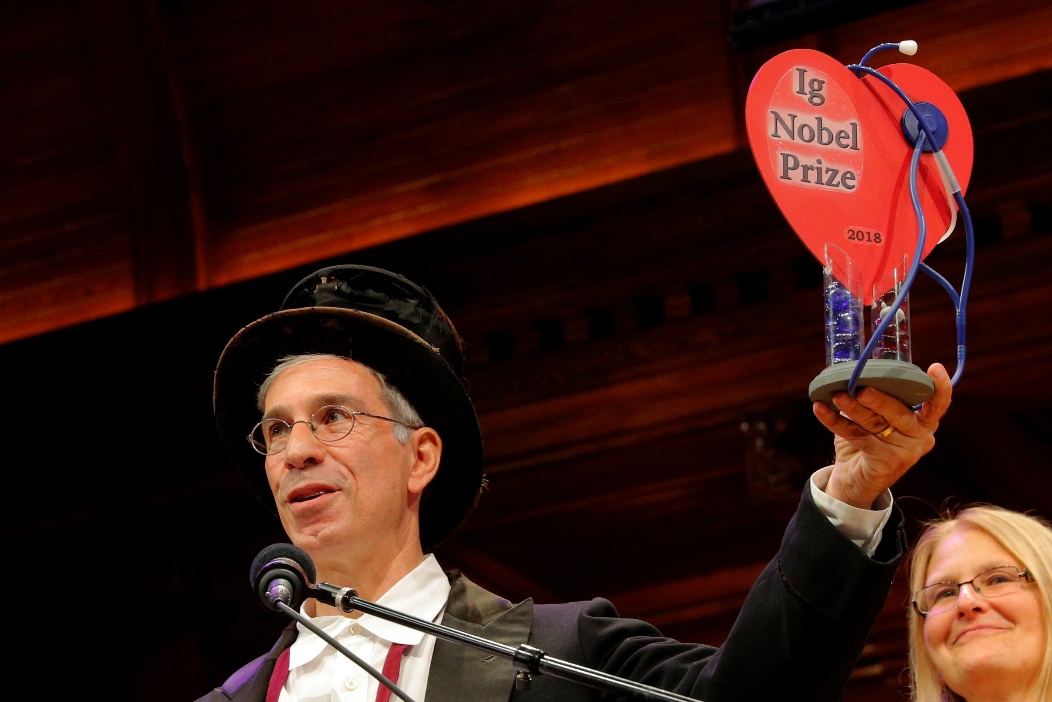 These Are Not Your Ordinary Nobels

Possibly the most amusing and rollicking awards of the science world, the Ig Nobels were awarded to their rightful owners on September 13th. The Ig Nobel Prizes are given every autumn, since 1991, in a much colourful and entertaining ceremony held at Harvard University’s famous Sanders Theatre. The most important characteristic of these prizes is that they are given to the most unusual, the wittiest, and the oddest scientific researches.

Among the research headlines of previous Ig Nobel awardees were why old men have big ears (2017-Anatomy), that the word “huh?” (or its equivalent) seems to exist in every human language (2015-Literature), the amounts of friction between shoe-banana skin-and the floor when a person steps on a banana skin that’s on the floor (2014-Physics), that leaning to the left makes the Eiffel Tower seem smaller (2012-Psychology), that that cows who have names give more milk than cows that are nameless (2009-Veterinary Medicine), discovery showing that the fleas that live on a dog can jump higher than the fleas that live on a cat (2008-Biology), and development of a way to extract vanillin from cow dung (2007-Chemistry). Just give it a thought, even if you don’t like chemistry, wouldn’t you find the idea of acquiring vanillin from cow dung interesting?

But make no mistake, none of these studies are a joke. All of them are seriously conducted researches, based on collected scientific data, and published in peer reviewed journals. The only criterion for the nominees is that they present studies which “make people laugh, and then think.” The primary purpose of the organisation is to celebrate the unusual and honour the imaginative – and through this, to spur the interest in science, technology, and medicine.

The winners receive their prizes by the hand of genuine Nobel Laureates and these prizes have a different design every year, befitting the theme of that year’s ceremony. For example, the trophies of 2017 had a rubber chicken and an egg, and the prizes were handed out by Nobel Laureates dressed as chicken eggs. The same trophies had the design of a petri dish in 2010, an hourglass in 2012, an emergency hammer in 2013, a huge clock in 2016, a head topped with a question mark in 2017, and a heart being examined this year. We should also mention about the paper airplane deluges at each year’s ceremony. Come on now, who does not want to throw a paper airplane to the speakers on stage?

Here are the 10 interesting, amusing, and unusual researches celebrated by an Ig Nobel prize in 2018:

ANTHROPOLOGY: Tomas Persson, Gabriela-Alina Sauciuc, and Elainie Madsen (SWEDEN, ROMANIA, DENMARK, THE NETHERLANDS, GERMANY, UK, INDONESIA, ITALY) – According to the evidence collected in zoos, chimpanzees imitate humans about as often, and about as well, as humans imitate chimpanzees

LITERATURE: Thea Blackler, Rafael Gomez, Vesna Popovic and M. Helen Thompson (AUSTRALIA, EL SALVADOR, UK) – Documentation on the fact that most people who use complicated products do not read the instruction manual