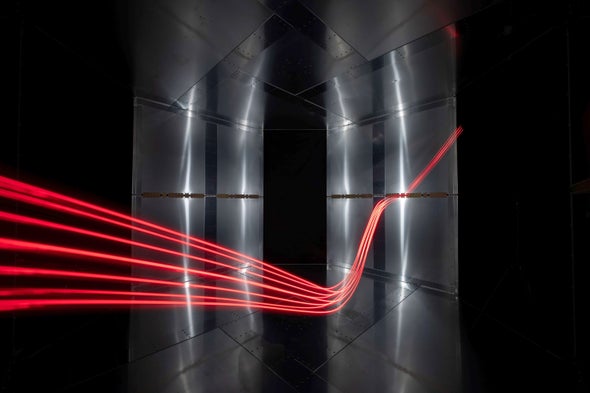 There is hardly anyone not irritated by entangled cords and cables lying around and dangling all over a room. Scientists have long been chasing ways to wirelessly charge at least small electrical appliances, cell phones, tablets, and similar devices. A new breakthrough from the researchers of Michigan and Tokyo Universities turns an entire room into a charging unit that is able to charge electrical devices without the need for wires. This new technology, published in Nature Electronics, can provide 50 watts of power thanks to magnetic fields.

Scientists led by the University of Tokyo built a test chamber measuring approximately 3×3 metres, fully coated with aluminum. In this room, they successfully charged lamps, fans, and mobile phones without using any cables, regardless of the locations of devices in the room.

In previous similar attempts, researchers either used potentially harmful microwave radiation or special stands that the devices had to be placed on. In this new technology, a magnetic field is generated between the conductive coatings on the room’s walls and a conductive column inside the room. A winding wire placed inside the electrical devices converts this magnetic field into electricity. According to the researchers, scaling this system is quite easy, without any concerns about safety or health.

One of the researchers, Takuya Sasatani says, “Something like this would be easiest to implement in new construction, but I think retrofits will be possible as well. Some commercial buildings, for example, already have metal support poles, and it should be possible to spray a conductive surface onto walls, perhaps similar to how textured ceilings are done.”

Expert Alanson Sample thinks that this technology can be used for powering not only mobile phones and laptops, but also medical implants, and may also open new horizons in mobile robotics technology. “There are a lot of clinical applications as well; today’s heart implants, for example, require a wire that runs from the pump through the body to an external power supply. This could eliminate that, reducing the risk of infection and improving patients’ quality of life.”

While working on this technology, engineers faced two hurdles to overcome. The first is to prevent the heating of biological tissues while creating a magnetic field that covers an entire room. As a solution, they used devices called lumped capacitors. These devices, when placed in wall cavities, generate a magnetic field that resonates throughout the room, but traps the electric fields inside capacitors themselves. Therefore, they can overcome the limitations of other wireless power technologies.

Another obstacle is to ensure that the magnetic field resonates through the whole room, reaching every corner. Since magnetic fields usually travel in circular patterns, “dead spots” are created in the room. To overcome this, the system creates two separate, 3D magnetic fields. One travels in a circle around the room’s central pole, while the other swirls in the corners, traveling between adjacent walls. This eliminates dead spots, generating energy at any point in the room.

As in most technology news, we can conclude this news piece by reminding that we still have years before this technology becomes operational on a commercial scale. Still, researchers continue to test the technology in both newly constructed buildings and existing structures. Because getting rid of cords and cables is the ultimate dream. As much as the convenience of having your mobile phone charging itself on its own once you enter a room, it would be nice to get rid of the visual pollution of cables lying around.