Skip to content
Homepage Çevre/iklim Wee is Beatiful (and Cool!) 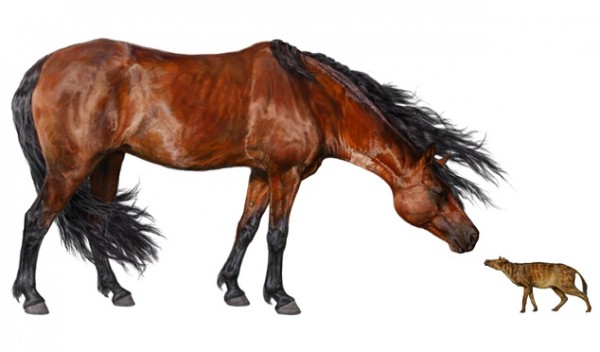 Wee is Beatiful (and Cool!)

A new study has confirmed that warming of the planet has resulted in dwarfing of mammals. Dwarfing, however, has not been as radical as the wrong impression one might get from the picture above. Miniaturisation was not in the modern horse on the left side of the image, but its already miniscule forebear seen on the right who lived millions of years ago. Still, the study serves to highlight dynamic relationship between the rising temperatures and body dimensions.

Paleontological data show that the mammals, whose early specimens were about the size of mice, diversified and spread with growing body sizes after the dinosaurs were wiped off in the great mass extinction caused by an asteroid impact 65 million years ago. According to fossil evidence, ancestors of modern horses, too, were featherweights, tipping the scale at 5-7 kg.

Earlier work by Nebraska University researchers led by Ross Secord  had shown that during a 20.000-year term in a warm period called the Paleocene-Neocene Thermal Maximum (PETM)56 million years ago when there had been a 6⁰C increase in global temperatures, the size of Sifrhippus sandrae , one of the first species of horses, had shrunk 30 percent to 3.9 kg from 5.6. According to the February 24, 2012 issue of Science, immediately after the return of the temperatures to normal, the animals started to grow in size again, with weight of Sifrhippus increasing by 76 percent to 7 kg. Secord and his teammates had  attributed the diminishing body sizes to the need to increase the ratio of total skin area to the volume of body in order to keep the body temperature constant.

Now, new research submitted to the November 2013 meeting of theVeretebrate Paleontology Society shows that during  another period of warming 53 million years ago, although not as radical as PETM, caused another epoch of downsizing among mammals, including deer and small primates resembling modern day lemurs. Evidence points to a 22-percent decrease in the size of the horse species Hyracotherium (old name of sifrhippus), which went back to former dimensions at the end of the epoch.

Both studies indicate major increases in the levels of atmospheric carbon dioxide during periods of warming just like today. The findings are also in conformity with a phenomenon called Bergmann Rule seen to apply to roughly 65-75 percent of mammal species today. The phenomenon shows that smaller species of animals of the same genus collect in warm regions, while larger species populate colder areas.