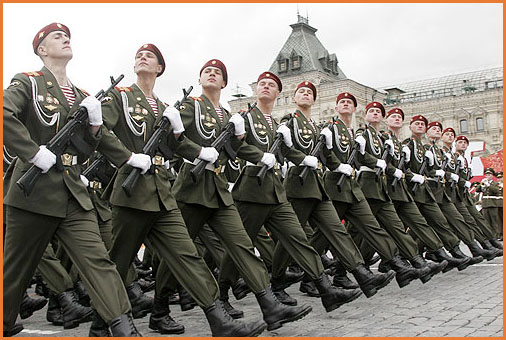 Those who have just signed up find it funny and and annoying: Even when you’re walking with your chum in leisure time, you’re required to walk in synchrony. And the ritual of marching off for the daily drill. But before long, you find it less annoying and – let’s confess, begin liking it. Those who fall out of step and disrupt the beat are nudged by fellow marchers before the drill sergeant cuts in with a mouthful of invective.
Even though it appears as a means of suppressing individual personality and promoting unquestioning obedience, professional soldiers insist that marching in step boosts morale.
According to a study led by UC (Los Angeles) anthropologist Daniel M.T. Fessler and published in Biology Letters, like in other species, synchronised action lies at the center of institutionalised collective human activities thought to stimulate cooperation. Synchronised action may have an evolutionary history of providing a perception of multiplied strength shared both by the participants and observers, including the enemies, researchers say. The mental picture of the adversary’s size and physical strength shapes the judgment as to its fighting capacity. And synchronised action may shrink the picture individuals form in their minds about the strength of their enemy, causing them to view them as physically smaller and weaker, the scientists hypothesized.

If you’ve lost this time, synchronised walking before the next match may

To check the validity of the assumption, the team made male subjects randomly paired to walk 240 meters either in synchrony or in casual gait. Then they were shown the mug shot of an angry-looking man described as a “criminal” and were asked to fill a questionnaire concerning their feelings about the walk and the impression the picture conveyed about the “criminal”.
In conformity with earlier findings, synchronised walkers described themselves happier compared to casual walkers and more friendly towards their fellow marchers. And, more importantly for the experiment, they described the person in the picture as smaller and weaker than he actually was.