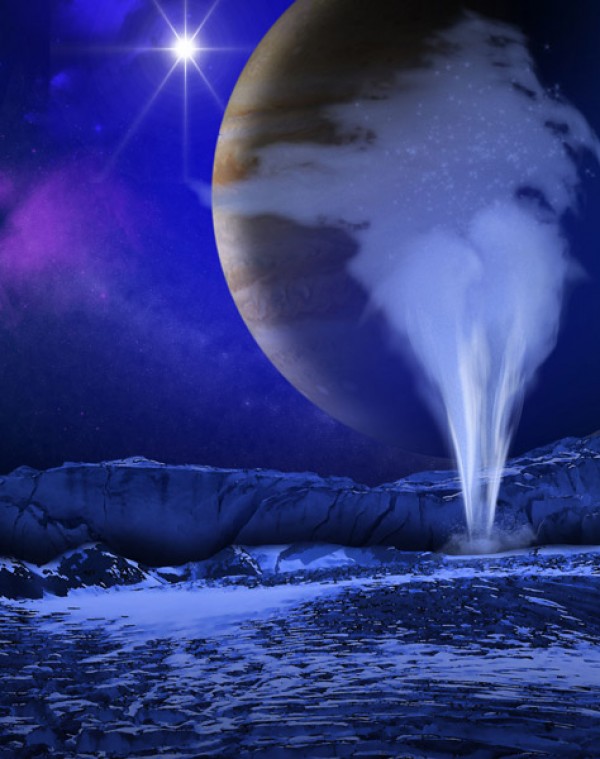 According to planetary scientist Lorenz Roth of the Southwestern Research Institute,  the vapor erupting  at supersonic speeds could be coming from the liquid water ocean covering the moon under the 100 km thick crust of solid ice.

Oxygen and hydrogen atoms emit or absorb ultraviolet light at distinct wavelengths. When these  signals are seen together in the spectroscopic analysis of light from a distant source, they generally attest to the presence of water vapor.  Intrigued by earlier observations which showed that oxygen,  usually detected in Europa’a tenuous atmosphere, was sometimes concentrated over the south pole,  Roth and his team observed the Jovian moon  in ultraviolet wavelengths with Hubble, in hopes of detecting water geysers. The observations yielded hydrogen emission lines at 121.6 nanometer wavelength. Roth and colleagues determined  that  the hydrogen signal, lasting seven hours, reached  its peak when Europa was at its farthest point from Jupiter  during its orbit. ve ekibi, yedi saat süren hidrojen işaretinin, Europa’nın Jüpiter çevresindekiyörüngesinin en uzak noktasında tepe noktasına eriştiğini belirlemişler. Noting  that the same phenomenon was seen  on Enceladus, the Saturnian moon with its famous geysers of ice,  the researchers conclude that  when they are at the farthest point of their orbits, the tension imparted by the by the powerful gravitational pull of the massive gas giant planets on the icy surfaces of their moons cause the crustal cracks at the poles to widen (allowing the liquid water below  break the surface and sublimate to vapor)  and close again.