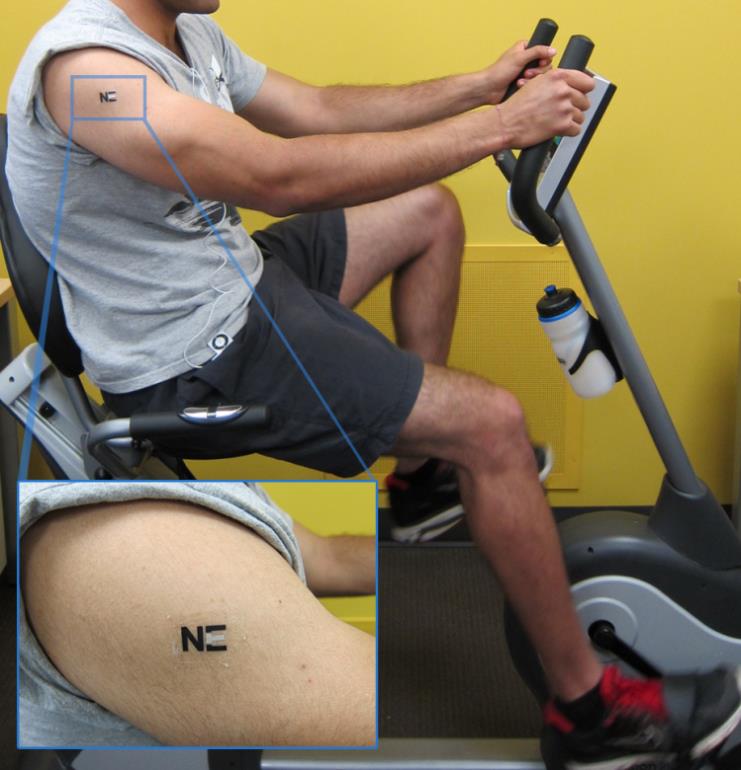 Thanks to a method developed by researchers at the University of California – San Diego, people will be able to charge up their small electronic devices. The innovation will also translate into easier stress tests for diagnosis of heart and lung diseases.

Making these possible is a sensor in the shape of a temporary tattoo pasted to the body. And what the sensor measures is a substance produced by the body, called lactate.

Lactate production increases in step with the intensity of the exercise. As the body requires more energy during  an intense work out, a process dubbed glycolysis kicks in. Glycolysis produces lactate along with energy. Since lactate is produced in excessive amounts in heart and lung diseases, in order to diagnose them doctors take blood samples from suspected patients at various stages of the stress test and measure lactate levels.  And this turns the stress test into a painful expreience for the tested subjects.

The tattoo  sensor developed by Wenzhao Jia, working for his Ph.D. at UC San Diego, and his fellow researchers, provides a fast, easy and painless alternative to the process. The team has printed a flexible lactate sensor on a temporary tattoo paper. The sensor contains an enzyme which strips electrons from lactate and produces an electric current. Pasting the tattoo onto 10 healthy subjects working out with an exercise bicycle for half an hour, the researchers saw that the lactate levels, rising in line with the duration and intensity of the exercise, could be monitored in real time.

Utilising these findings, the team then developed a biobattery working on sweat. In the biobattery, the anode contains the enzyme which strips electrons off  lactate, while the cathode contains a molecule which absorbs them. The advantages of these batteries over the conventional ones are their easier recharging, use of renewable energies, eliminated danger of explosions and non-use of toxic materials.

Testing the biobattery on 15 subjects riding a bicycle fixed to the floor, the team observed power generation in varying levels. An interesting phenomenon was that most power was generated by the least fit group exercising less than once a week. While the middle group exercising once to three times a week generated more power, the lowest level s were produced by “fitness fiends” exercising more than three times a week. This may be due to heavier production of lactate, and hence more power, by people whose body functions were not adapted to a regime of routine training.

The researchers have now set their sights on boosting the level of power generation, which currently stands at 70 microwatts, and devising a mechanism for storing the generated power.