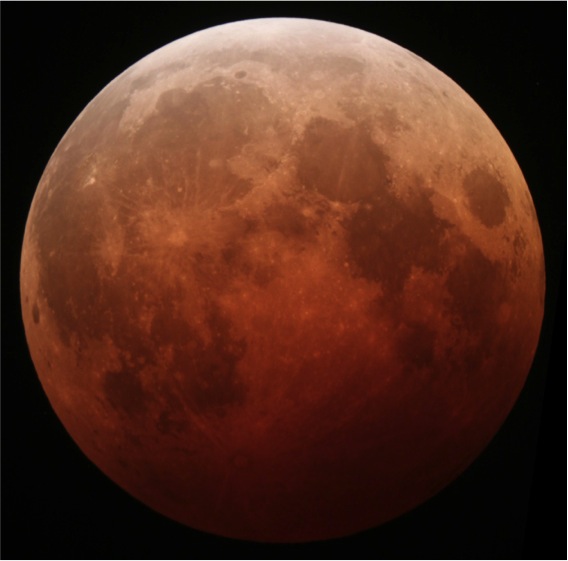 Some 1.5 billion people on 27-28 September  enjoyed a rare celestial spectacle which can be viewed only once in  a few decades:  An oversize full moon draped in red – or “ blood”, to use some less inspired  media metaphors – for more than an hour.

Appearing larger than ordinary full moons since it was 50,000 km closer to the Earth, the moon remained in the shadow of the planet for 72 minutes, starting 01:07 GMT.

In the dark part, or “umbra” in astronomy jargon, the sun’s light cannot fall on the moon. But as the sun has a very large diameter, in the “penumbra” or the partial shadow, the light cannot be fully screened.  Total eclipse occurs when the moon completely enters the umbra. But because the Earth’s atmosphere diffracts part of the sunlight and deflects it onto the lunar surface, the moon cannot become completely dark. As the sunlight passes through the Earth’s atmosphere, lights with colors of shorter wavelengths scatter off the molecules while the red light with relatively longer wavelength can pass through and reach the moon’s surface to give it the reddish hue of the eclipse.

Traditionally dubbed “blood moon” in the West because of the color, lunar eclipses occur when the sun, the moon and the Earth align and the moon slips into the shadow cast by the Earth in the middle.  The reason for the reddish color the moon takes during the  full eclipse is the diffraction of the part of the sunlight onto the moon as it passes through the atmosphere at the edge of the Earth and the scattering of colors with shorter wavelengths than that of the red (see: box).

Lunar eclipses are phenomena occurring at least twice a year.  The number of eclipses which occurred or are to occur within the 21st century is calculated to be 228.

But, because the orbital plane of the moon is at an angle to the Earth’s orbit and its distance to the planet varies cyclically, its size and luminosity during eclipses are not always the same.

The moon has an elliptic orbit around the earth. The closest point of the orbit to the planet (perigee) is 357,000 km and the farthest (apogee) is 406,000 km away.  As a result of the dynamics of the movements of Earth and the moon around  each other and their orbit of the sun, the perigee eclipse when the moon is closest to the Earth and hence appears biggest,  occurs once in 14 eclipses. In these eclipses, the moon appears about 14 percent larger and 30 percent brighter.

In old times, the supermoons were also called the “harvest moon” as its greater luminosity allowed farmers to work well into the evening. The “supermoon” epithet was first coined in 1979.

As seen, neither lunar eclipses nor supermoons are rare events.  What is rare and indeed renders the latest eclipse special, is the eclipse of the moon in its “super” phase, when it’s closest to the Earth and , hence, brightest.  These events take place at long intervals, the former one was in 1982 and the next one is not due before 2033.

So, it was worthwhile staying up to watch the moon in its best at the expense of your sleep, wasn’t it?