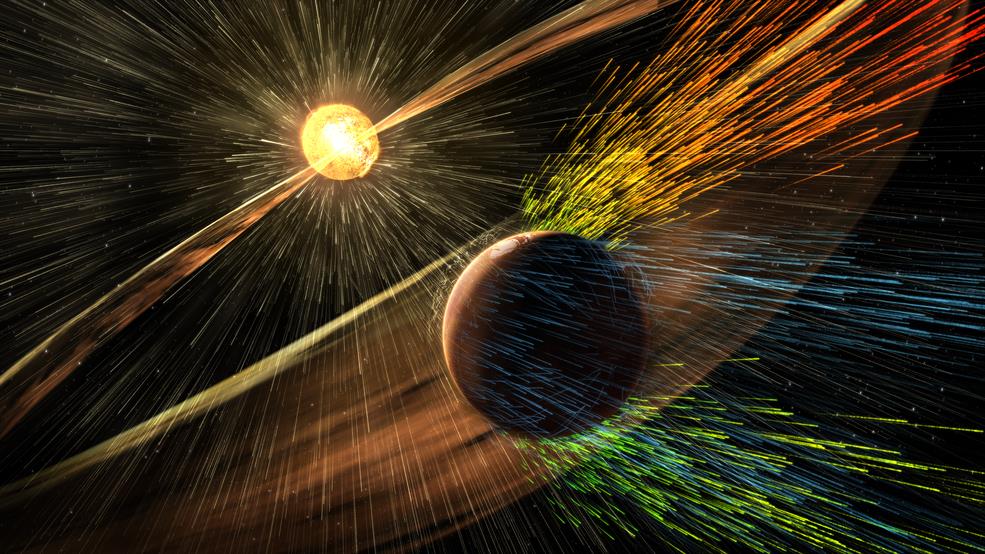 The MAVEN (Mars Atmosphere and Volatile Evolution Mission) spacecraft NASA had sent to Mars two years ago has revealed how the once warm and wet planet with rivers and seas on its surface was converted to the dry and frigid desert it is today by the constant flux of charged particles called the solar wind and huge mass ejections from our star that eroded and stripped its atmosphere.

According to the findings derived from the MAVEN data published in Science and Geophysical Research Letters, the mechanism which eroded the once-thick Martian atmosphere operated thus:  As the solar wind, mostly composed of positively charged protons and negatively charged electrons whizzed past the planet which lacks a protective magnetic shield like the Earth’s (because it packs just a tenth of its mass and hence its liquid iron core cooled and solidified much earlier)  the magnetic field it carried creates an electric field which accelerates the charged atoms (ions) at the top of  its atmosphere and catapults them into space.

In the end, 100 grams of matter is swept away from the Martian atmosphere every second. Although this may not seem  much at first glance, NASA researchers  liken this to someone pilfering a few coins from a supermarket tiller, which add up to a substantial sum in time.

Since the sun was far more active and tumultuous in its youth billions of years ago, these tantrums also look to have played a major role in the desertification of the “Red Planet.”

According to MAVEN data, the solar wind and ultraviolet radiation sweep away the gas from Mars’ upper atmosphere in three main regions:  At the “tail” or extension of the solar wind behind the planet, polar plumes of matter ejected above the poles and from an extended gas cloud surrounding the planet.  Researchers have found that 75 percent of ions escape from the tail and 25 percent from the plumes while gas cloud accounts for an insignificant amount.