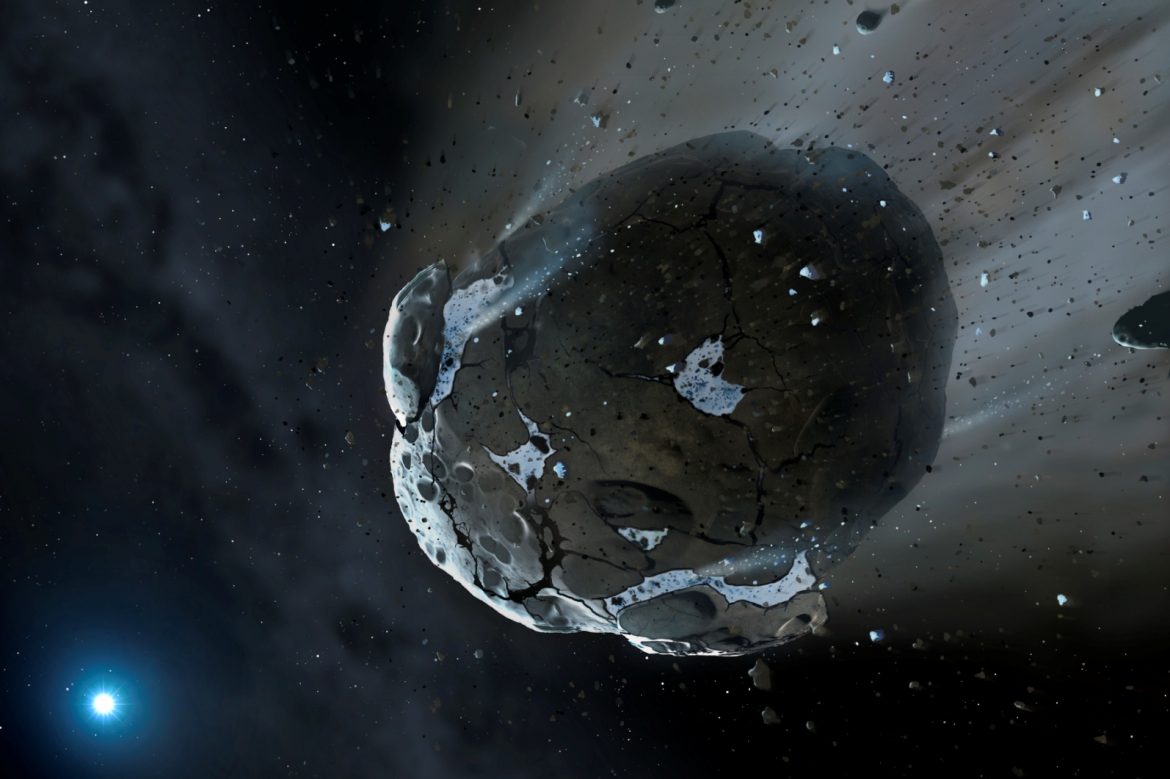 Signs of Past Life on Dead Star

An excess of oxygen astronomers detected on a dead star is seen as a sign that it has torn apart a water rich asteroid, and the abundance of water , in turn, has fueled speculations that it could have once hosted a planet that harboured life.

The object of the study is a “white dwarf” 170 light years away from the Earth, catalogued as GD 61. In layman terms , it is a corpse, the product of an end awaiting most stars, including our sun. In about eight billion years, when it exhausts the fuels which sustain the fusion reactions that balance the inward pressure of outer layers, the sun , no longer able to produce the required energy, will puff away its envelope into space; and the core, containing about half of  the star’s original mass, but collapsed to about the size of the Earth and heated up, will emerge into open as a “white dwarf”  to cool slowly over billions of years and eventually disappear as a “black dwarf”.

The evolution of a Sun like star culminating in a white dwarf (upper panel). Giant stars, however, punctuate their short lives by turning into neutron stars or black holes (lower panel).

The gravity of the centres of these dwarfs is so strong that, elements heavier than helium should immediately precipitate to the centre. But in the atmospheres of  some white dwarfs, including GD 61, astronomers have detected the presence of  such relatively heavy elements as silicon, oxygen etc. which shouldn’t be there.    Scientists think these  are pollution raining on the dwarf from the remnants of star’s death,  like planets, asteroids or comets which get captured by the gravitational field of the dwarf and disintegrate as they spiral in.

The reason for astronomers’ special interest in GD 61 is the high ratio of oxygen among these pollutants.  When the astronomers, first thinking that an asteroid  falling onto the white dwarf could have been coated with frozen carbon dioxide or “dry ice” discarded the scenario when no carbon was detected in dwarf’s atmosphere, the only viable alternative that remained was the gravitational capture and fragmentation of a water rich asteroid near the dwarf. Calculations show that the shredded asteroid was 26 to 28 percent water (ice) . The amount of water in dwarf’s atmosphere indicates that the asteroid was 90 kilometres wide and had a mass close to that of Vesta, one of the biggest asteroids in the Solar System.  But  since the dwarf should have drawn in some of the oxygen on its surface, astronomers do not rule out a larger mass for the disintegrated  asteroid.

Cambridge University astronomer Jay Farihi  who led the study points to the role of the water rich asteroids in the formation of life-supporting planets as they carry   liquid water essential for life to the planet.  He notes that  while it’s not possible to roll back the history of GD 61, the  evidence for the water rich asteroid at least shows that the building blocs of Earth like planets had been present around the deceased star.