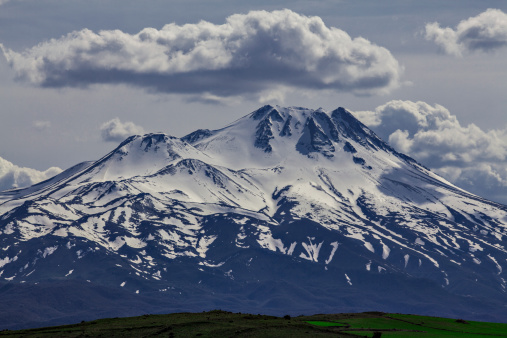 Analysis of rocks atop dormant volcano settles debate over 8600-year-old mural at Çatalhöyük.

Radiometric dating of lava and pumice samples at the main summit and base of the twin-domed Hasan Dağı (Mt. Hasan) near the Central Anatolian city of Konya by American and Turkish geologists, looks to have setteled the half-century-long debate about whether a mural discovered during excavations at Çatalhöyük, one of the earliest and best known neolithic settlements, depicts an erupting volcano: The clear verdict is  that long-quiet Mt. Hasan’s last eruption overlaps with the emergence of nearby Çatalhöyük as a major farming settlement.

A dot-studded figure underlain by rows of squares found at the remains of a house unearthed at level VII of the excavation site and carbon dated to 6600 BCE, was an object of enduring debate within the archaeological community. British archaeologist James Mellaart who led the excavations in early 1960s and some others after him had explained the mural as a leopard skin pointing to the abundance of leopard motifs at the site, ascribing no special meaning to the sets of squares underneath. Others, however, were adamant in their interpretation of the figure, bearing a striking resemblance to Mt. Hasan  with its two humps, was actually depicting an erupting volcano spewing semi-liquid lava blobs and “volcanic bombs”. The squares below were understandably seen as the map of a nearby settlement.

Now a team of earth scientsits, led by Alex K. Schmitt of UCLA, and including Erkan Aydar from ATERRA R&D in Ankara, Erdal Şen and Inan Ulusoy from Ankara’s Hacettepe University, Martin Danisik from  the Waikato University in New Zealand and Oscar M. Lovera, another UCLA scientist, looks to have provided the long-sought answer with scientific evidence dug out from rock and pumice samples they collected from the summit and the base of Mt Hasan lying 130 kilometers to the northeast of Çatalhöyük. The findings of radiometric dating based on the decay rate of uranium particles to thorium in zircon crystals excavated from the samples and published in the open access journal PLOS ONE,  attest to an eruption in 6900 BCE, with a margin of error of 640 years. The date is in conformity with the time the mural was painted and the presence of humans in the vicinity of the volcano who could have witnessed the eruption. The work has also ruled out the possibility that the activity of the shallow magma chamber under the volcano could be dying down.