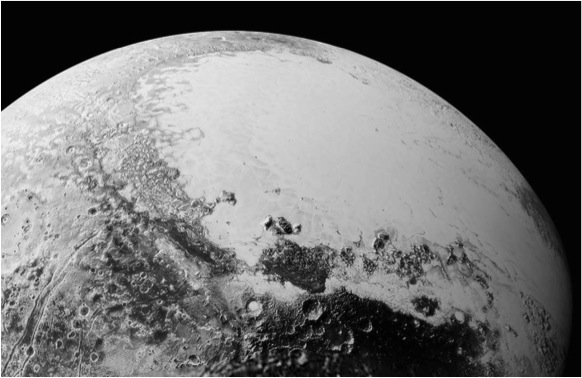 A new set  of images released by NASA after its New Horizons spacecraft which made a flyby to Pluto on July 14 recently entered intense data transmission mode, add to perplexing surprises which this enigmatic object so  generously presented after remaining a hardly-perceptible dot for 85 years  since its discovery in 1930.

The artificial perspective image at top shows how you would see Pluto if you had been in the spacecraft 1800 km above its equator.  The image extends northeast from the dark, crater-studded terrain provisionally named Cthulhu Regio to the vast, highly-reflective flat expanse provisionally named Sputnik Planum which has been covered by layers of ice of different chemical composition. The image, in fact has been taken when the spacecraft was 80,000 km above the surface during the flyby.

In another image centered on Sputnik Regio, big differences among structures surrounding the plain which acquired fame as “Pluto’s heart” appear in bolder relief.

Entangled, shattered formations at the northwestern edge of the icy plain are expected to provide valuable information on the extent, strength and age of the geological activity.

Another image, taken when the spacecraft was 50,000 km away, highlights the marked difference in the reflectivities of the old terrain pockmarked by craters and the smooth (hence young) Sputnik Planum. The image, covering a 350-km-wide area, shows clusters of icy mountains and parallel ridges resembling sand dunes in a triangular dark formation.

In another image, captured by the spacecraft from 490,000 km away 10 hours before the flyby, displays the fractured surface of Charon, Pluto’s 1200-km-wide largest moon, made up of regions with vastly different chemical compositions. The dark area on Charon’s North Pole is believed to be nitrogen gas sublimating from Pluto and precipitating on Charon as a consequence of magnetic interactions between the two bodies. Under constant bombardment by ultraviolet radiation from the Sun, nitrogen was converted to a reddish chemical called tholin.