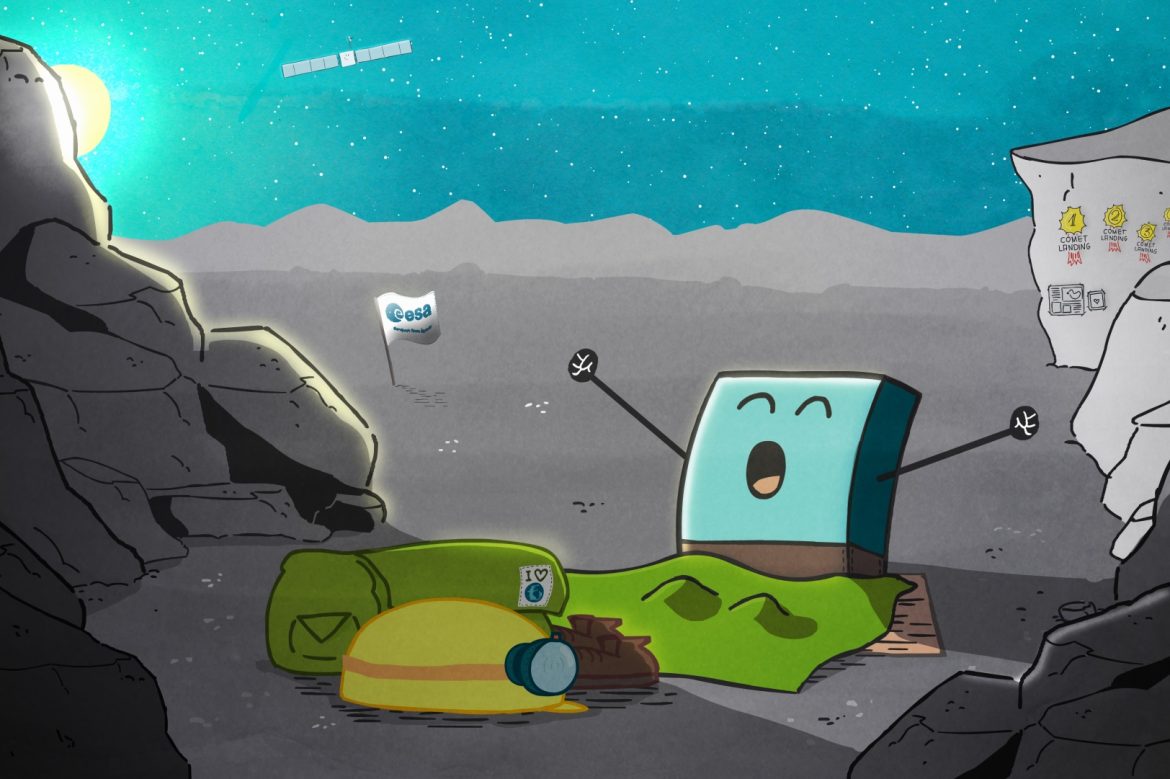 “Hello Earth, can you hear me?”

The lander Philae, which the European Space Agency (ESA) put on the surface of comet 67P/Churyumov-Gerasimenko last November, woke up from the hibernation it had gone into seven months ago after its batteries went flat when a problematic landing prevented its solar batteries to absorb sunlight.

“Hello Earth, can you hear me?” was the first post-slumber tweet it sent from its special account via its mothership Rosetta in orbit around the comet.

Philae, which Rosetta  released onto the surface of  the comet on November 12 when it was 511 million kilometers from the Earth after a ten-year voyage, bounced twice when the harpoons which would anchor it to the ground failed to deploy, eventually settling on a location, apparently in the shade of a cliff where it could not acquire adequate solar power to recharge its batteries.  Still, before it was finally drained of power on November 15, it carried out its tasks for 60 hours, sending back priceless data it collected with a suite of sensitive equipment.

Another factor which contributed to the mishap was the comet’s low gravity, one-hundred thousandths that of the Earth’s, which made the lander weigh a meagre one gram on its surface.

Besides data on the structure, composition and dynamics of comets, Philae found that water molecules in 67P/Churyumov-Gerasimenko’s atmosphere differed from those in Earth’s oceans.  This threw into doubt the long-held belief that water was ferried to early Earth by comets, lending weight to theories which assigned the role of tankers to asteroids which bombarded the Earth, Moon and inner planets in early stages of the Solar System’s evolution.

Another important discovery Philae made was the presence of organic (carbon bearing) molecules, which are the building blocks of life.

67P/Churyumov-Gerasimenko, which was 511 million kilometers from the Earth when Rosetta and Philae first arrived, has now approached to 300 million kilometers. The comet, which is expected to make its closest pass to the sun on August 13, will have a velocity of 135.000 kilometers per hour by then.

The statement issued by ESA’s operations center in Darmstadt, Germany, said Philae had made contact on Saturday, and communicated for 85 seconds during which it transmitted some 300 data packs through Rosetta, with 8000 more waiting in its mass memory. It appeared that the lander had woken up a few days earlier and had been trying to establish contact since then. The transfer of data will enable ESA scientists to bring themselves up to date about what has been happening on the comet in recent days.