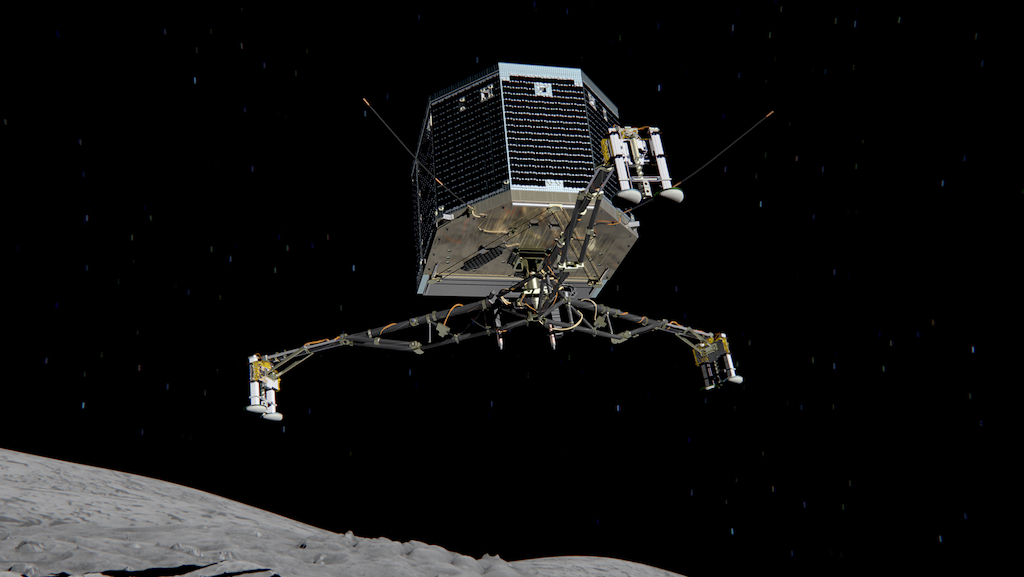 European Space Agency ESA’s intrepid lander Philae, which succeeded in holding onto the comet 67P/Churmuyov-Gerasimenko despite bouncing twice after a 500-million-kilometer chase,has detected organic (containing carbon atoms essential for life) molecules in the thin “atmosphere” of its frigid host, ESA officials disclosed. No details were provided by ESA as to the nature of the organics.

ESAofficials further disclosed that Philae had found the comet surface to be rock-hard ice under a 10-to-20 cm thick blanket of dust.

Another important piece of information with important bearings for Earth’s history Philae has provided is that deuterium-to-hydrogen ratio in the water molecules in the comet’s atmosphere was higher than that in Earth’s oceans. (Duterium, also known as a “heavy hydrogen”, contains  a neutron in addition to the proton in its nucleus, compared to the hydrogen’s which is no more than a proton). The reported composition of cometary water is seen as throwing into doubt the assumption that Earth got its water from impacting comets, bringing asteroids to the fore as the main vehicles once again.

But the data, transmtted via Rosetta spacecraft orbiting the comet, lacked the eagerly awaited information about the  composition of P67’s nucleus, as apparently the drill which was successfully sunk 20 cm into the surface and taken out, failed to deliver samples to the lander’s ovens to be heated and analysed.

The disclosure followed an earlier statement that the lander, having pulled off a first in the exploration of  the Solar System by touching down on the comet 67P/Churmyov-Gerasimenko 511 million kilometers away, had completed all its experiments, stealing a march on its solar-power batteries which ran flat due to mishaps during landing.

Before the 57-hour battery life was exhausted, the lander was reported to have executed all of the 11 experiments it carried and communicated the data to Rosetta, the ESA spacecraft orbiting the comet, to be beamed back to Earth. Furthermore, the lander was raised four more centimeteres from the comet’s surface and rotated 35 degrees in hopes that the manoeuver would better position it to receive sunlight immediately before the craft went into hibernation, with slim chance given to reestablished contact anytime soon.

After riding piggyback on Rosetta for over 10 years in the chase for the comet,  Philae had landed – seemingly awkardly – on a so-far unseen spot on the comet’s surface after bouncing twice due to malfunctioning of critical pieces of the landing equipment. ESA officials blamed the glitches on the failure of a downward pushing thruster on top of the lander to  push it onto the surface, and the failed firing of harpoons which would supposedly anchor it firmly.

Although weighing 100 kg on Earth, the washing machine-sized Philae would weigh just 1 gram on P67, whose gravity was one-hundred thousandths that of the Earth.

Providing a running commentary throughout the episode, ESA’s Webpage disclosed that on its first bounce, the lander had moved about a kilometer away from the target spot, traveling for one hour and 50 minutes with a speed of 38 cm per second. Then bouncing again on contact, it finally landed seven minutes later after moving at 3 cm a second.

The problem appears to be that the lander, its whereabouts still not known on the 4-kilometer long, duck-shaped comet, has come to rest in the shadow of a cliff, as understood from the first piece of a panoramic view it had transmitted. Its position reportedly allows its solar panels to soak up just 1.5 hours of sunlight during the 12.4-hour comet day, whereas they need 6-7 hours of charging to provide adequate power to the lander.

After some hesitation, ESA officials instructed the lander to carry out all its primary tasks ahead of the anticipated power failure, instead of losing valuable time and last dregs of power by complicated manoeuvers to get  Philae out into the sun.

Among these tasks were the determination of the density and thermal properties of comet’s surface, drilling to 20 cm below the surface to place samples of comet material in Philae’s two “ovens” to be heated and analysed by X-ray spectrometry to characterise gases and look for possible organics, measuring of the magnetic field and interaction with the charged particles streaming from the sun, called the “solar wind.” When the craft, currently over 500 million kilometers away from the sun, approaches within 180 million kilometers, it is expected to blow out its gases which Philae was supposed to identify.

Data obtained from the comet which has preserved its pristine condition since the formation of the Solar System 4.5 billion years ago, is expected to yield valuable information about the protostellar disk of gas and dust in which the sun and the planets formed.

First the culmination of the problematic touchdown, and then the reestablishment of contact with the lander after a long silence, had twice caused jubilation at the ESA mission control room in Darmstadt, Germany. Although another reprieve was denied to the craft, ESA officials and technicians did not look depressed, saying the operation was a huge success. They did not rule out the possibility of Philae kicking back to life when the comet draws nearer to the sun.

ESA officials explained that the orbiter was named Rosetta because just as the famous Rosetta stone – a slab incribed with a text in several  already-deciphered ancient scripts besides the cryptic hieroglyphs of the ancient Egyptian civilization – had helped uncover the mystery of the latter, the spacecraft would uncover the mysteries of the Solar System. Lander Philae, meanwhile was so named after the place where the famed Isis temple, and other relics were located, before it was submerged under the reservoir of the Aswan Dam.  The name Agilkia chosen for the original landing spot on the comet, through a contest ESA organized, is the name of the small island on Nile, where the dismantled relics were transported and reassembled.