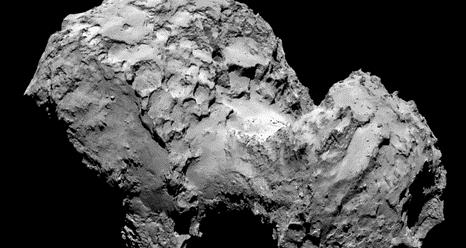 After chasing it for more than a decade, the European Space Agency’s (ESA) Rosetta spacecraft finally arrived at its rendezvous with comet  67P/Churyumov-Gerasimenko, or 67P for short, on August 7.

"After 10 years, five months and four days travelling towards our destination, looping around the sun five times and clocking up 6.4 billion kilometers, we are delighted to announce finally we are here," said Jean-Jacques Dordain, ESA's director General. During  these years, Rosetta circled the sun five times and skirted Mars twice and the Earth once for “gravity assists” that catapulted it to the trail of its quarry with boosted speed

Over the next four months, the spacecraft will orbit the comet and study its evolution as it goes around the sun. The suit of instruments it carries will characterize the comet’s ice, and dust -and possibly-rock- nucleus,  and “coma”, the bright envelope of gas and dust surrounding it. Currently staying 100 kilometers  away from the comet, it will first halve the distance to 50 kilometers and then to a mere 30 kilometers as it orbits the odd-shaped comet which is thought to be “contact binary”, the product of a slow collision between two separate comets. The spacecraft will pull another space exploration first by landing a probe, named Philae, on its surface for further analyses.

This image of the smooth area at the base of the “body” section of Comet P67 taken by Rosetta from a distance of 130 kilometers, clearly displays boulders, craters and steep ridges.   (Photo by NASA)

P67 has an elliptical 6.5-year orbit around the Sun which takes it to outsside the orbit of Jupiter at its farthest, and to between those of  Mars and the Earth at its closest. Normally the comets hail from two distant reservoirs dating from the formation of the Solar System, but this one’s orbit apparently decayed after countless passes around the Sun.

C omets, which are usually described as kilometer(s)wide “dirty snowballs”, occasionally visit our skies (thankfully from a distance) after getting dislodged from the depot of the Solar System’s formation debris outside Neptune’s orbit dubbed the “Kuiper Belt” or  the spherical comet reservoir called the “Oort Cloud” much farther away.

An eye-catching feature of the earlier pictures of the comet was the brighter appearance of the narrow “neck” section between the “head” and the “body”. According to  ESA experts, this may be a result of a different material covering the area, or a result of an unknown topographical effect