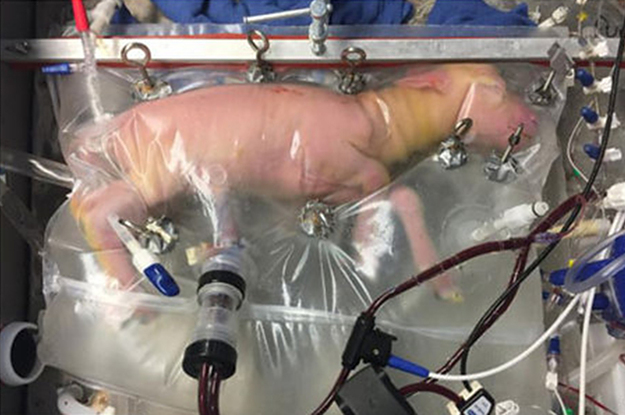 Physicians at the Children’s Hospital of Philadelphia succeeded in keeping fetal lambs alive in uterus-like bags for weeks. They placed the lambs in sterile, temperature-controlled, transparent plastic sacks filled with amniotic fluid and connected their umbilical cords to a machine that pumped oxygen to their blood, powered by the lambs’ own hearts.

Eight lambs survived for as long as four weeks inside these devices. This is equivalent to a human fetus of 22 or 23 weeks, about the earliest period that a human baby can be born and survive outside the womb. The animals were able to move, open their eyes, swallow normally, and were “born” when researchers removed them from the sacs.

Alan Flake, director of the hospital’s Children’s Institute for Surgical Science, said the machinery would not be capable of incubating a child for a full nine months. Yet, it can be used to extend the fetal viability and rescue the infants born prematurely. Tests to help premature babies could begin in three years. Still, Flake says he would be “very concerned” if doctors wanted to use this device to try to rescue infants born earlier than 22 weeks because the earliest stages of development are crucial and involves a lot of factors. “There are likely developmental requirements that we cannot replicate earlier in gestation, so we could create developmental abnormalities,” he adds.

Currently, premature babies are placed inside an incubator that warms them and protects them from germs. Placing babies inside the new device, which imitates a mother’s uterus, could lower the risk of death or long-lasting problems by allowing babies to finish developing. Babies born earlier than 26 weeks are likely to develop lung problems as well as displaying delays in physical development and learning.

Researchers have been working on artificial wombs for a long time. Previous attempts often resulted unsuccessfully because they relied on mechanical pumps to circulate blood. Researchers are now planning to redesign the fluid-filled enclosure so that it looks more like a traditional incubator, rather than “a plastic bag that can be hanged on a wall”.