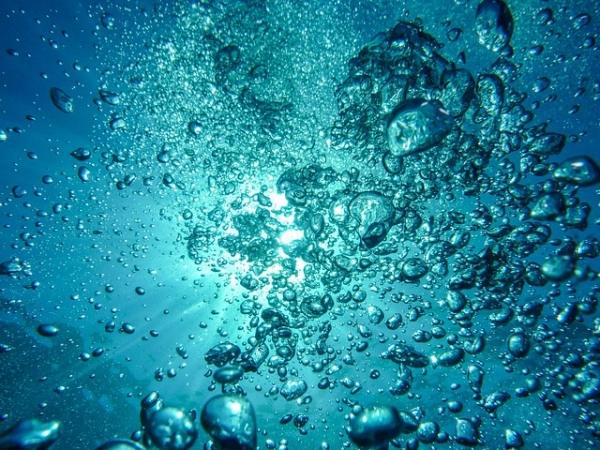 Rising temperature of seawater at mid depths of Pacific Ocean off the shores of Washington as a result of global warming cause methane deposits lying frozen on the seafloor to dissolve and rise as bubbles of gas, a new study by University of Washington researchers shows.

Some of this potent greenhouse gas may rise to the surface and mix with the atmosphere to contribute to global warming, researchers warn. The study notes that waters 500 meters under the surface  keep warming, a depth which coincides with that where frozen methane is released as gas.

Computer simulation  showing the column of methane bubbles rising from the frozen methane mounds on the higher elevations of the  Pacific seafloor off the coast.

The methane molecules (CH4), the main ingredients of natural gas, stay trapped in cages of ice called clathrates under frozen earth or in the cold depths of the continental shelves under immense pressure of the ocean waters as mounds called methane hydrates.

A potential energy source far in excess of all the known oil and natural gas reserves, metal hydrates understandably whet the appetites of governments and energy companies. But the possibility of explosive dissolution of methane hydrate mounds destabilising due to commercial gas extraction, fuels fears of environmentalists . (For a detailed review on methane hydrates, see: KURIOUS, wide angle, Methane Bomb in The Arctic.)

With its biologically productive waters and a seafloor subject to powerful geological activity, Pacific continental shelf off north America is particularly rich in methane hydrate deposits.

Rising temperatures in the mid-depth ocean layer off Washington is believed to be caused by the warming of the Okhotsk Sea between Japan’s Kuril Islands and China for the past 50 years, with surface waters becoming denser, sinking and migrating westward.

The study is one of the first focusing on methane release in Northern Pacific. Until now, surveys had been mainly on methane emissions from the continental shelf in the Arctic off Eastern Siberia.

The study falls short, however, of making firm predictions about the fate of the released methane. It could be consumed by the sediments on the seafloor and bacteria in ocean waters, thus creating large swathes of anoxic seafloor, while a portion may reach the surface and rise to the atmosphere to contribute to the ongoing process of warming.