Skip to content
Homepage Astronomi Mars Gets A Close Shave 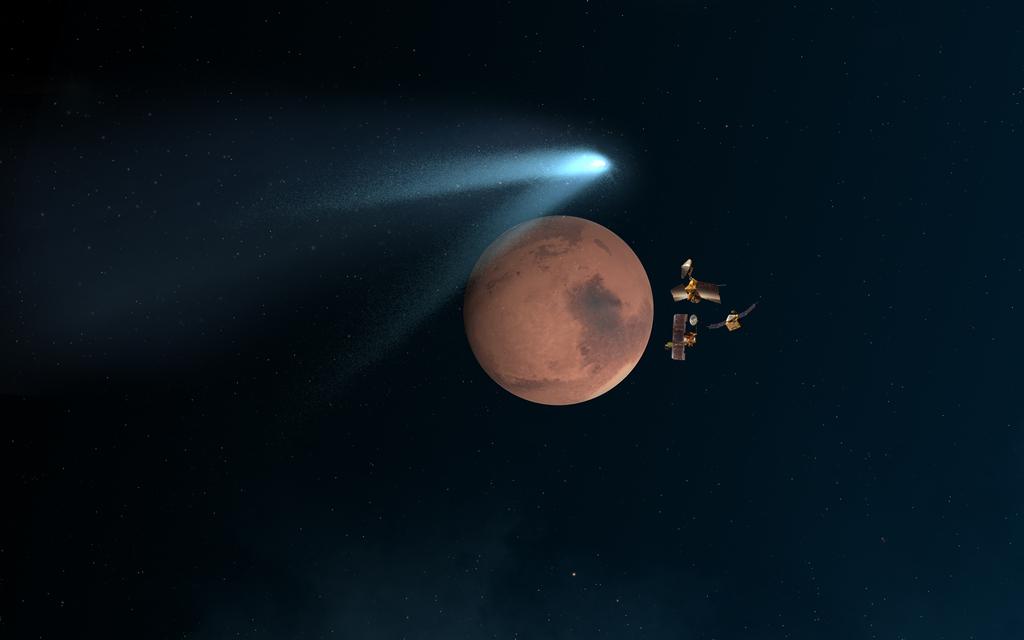 Mars Gets A Close Shave

Astronomers were able to photograph the nucleus of a long-period comet for the first time when the Siding Spring, hailing from distant outposts of the Solar System whizzed past Mars virtually at a stone’s throw.

The visitor, officially named C/2013 A1 Siding Spring, brushed the Red Planet at 56 km per second from a distance of only 140.000 km, or about a third of the Moon’s distance from Earth.

The reason why planetary scientists were so excited about the comet’s close approach – which would cause widespread apprehension had it been the Earth in its crossbars – was golden opportunity it presented for the study of the effect of comet’s atmosphere, or the gas and dust it spews as it approaches the Sun, on the thin Martian atmosphere. Three orbiters from NASA and European Space Agency ESA as well as the newcomer from India, plus two rovers on the surface were mobilised for the job. The orbiters, however were shepherded to the lee side of the planet during critical hours to protect them from the potentially damaging bombardment of particles from the comet.  After a tense wait of three hours, relieved NASA officials announced that MAVEN (Mars Atmosphere and Volatile Evolution), recently put in orbit, had emerged from hiding unscathed.

The first surprise Siding Spring revealed was the 500-meter size of its core, which is half of the average one kilometer diameter of short-period comets. According to some astronomers, the dimunitive size of the Mars grazer may yield clues about possible differences between the structures and evolution of comets in two main comet repositories, the disk-shaped  Kuiper Belt chiefly housing short-term comets outside the orbit of Neptune, and the spherical  Oort Cloud extending much farther out, housing trillions of long-period comets.