Skip to content
Homepage Astronomi King of the black holes! 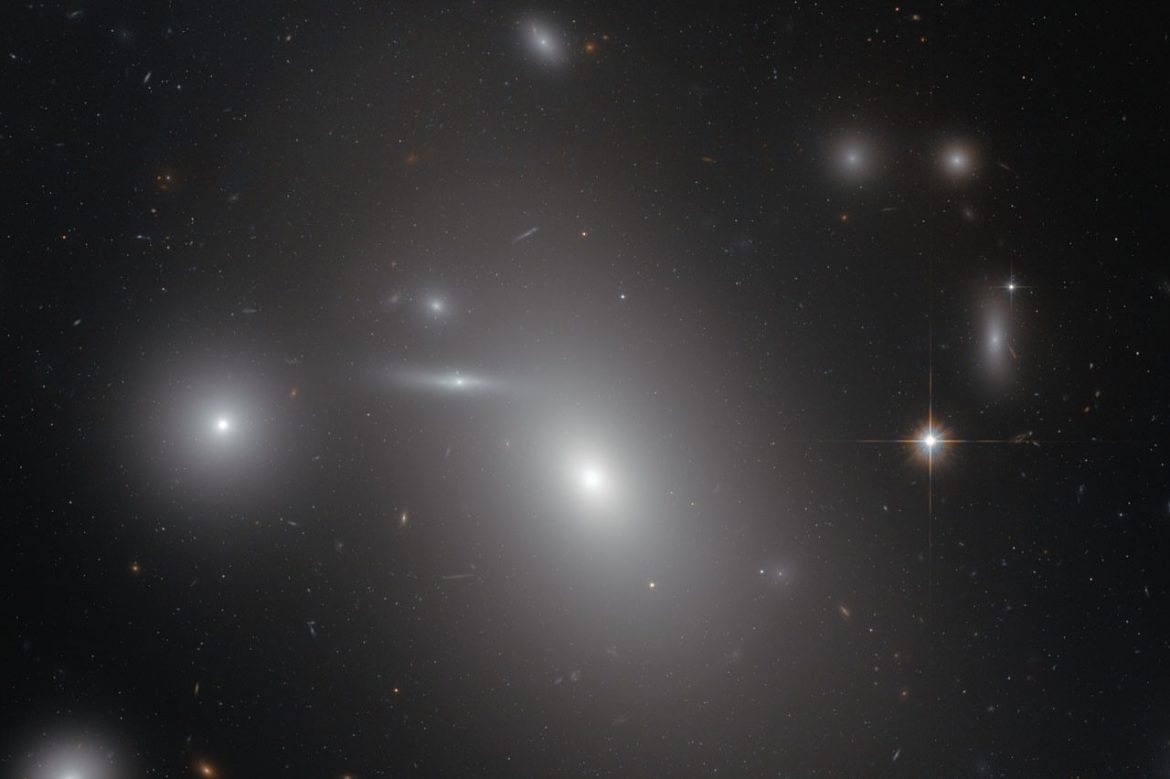 King of the black holes!

King of the black holes!

That most  spiral and elliptical galaxies harbor supermassive black holes at their cores has been known for decades. But there is a hiererchy among the giants, too, with the ruling monarch residing some 300 million light years away. Located at the center of the galaxy NGC 4889 deep inside the Coma Cluster, the leviathan is 21 billion times that of the sun! Our own heavyweight at the center of the Milky Way pales beside it as a skinny local vassal with a mere 4 millon solar masses.

The event horizon of the black hole at the center of NGC 4889, the biggest and brightest galaxy at the center of the image above,  the spherical boundary from which even light cannot escape after straying in, has a diameter of 130 billion kilometers, which is 15 times the orbital distance of Neptune, the outermost planet in our solar system. In comparison, the diameter of the event horizon of the  Milky Way’s supermassive black hole named Sagittarius A*, is 44 million kilometers at most according to the latest estimates.

Elliptical galaxies which resemble elongated spheres form through the collsion and merger of  disk-shaped spiral galaxies with rich reservoirs of gas which they convert into stars. The merger causes their gas stocks to gravitate to the center and the original black holes at centers of the merged galaxies gradually draw closer and finally unite unite to form a much heavier black hole which further gains mass by feasting on the gas collecting at the center.

Black holes are defined as points of infinite density called “singularity” and the boundaries of the regions where their gravitational  fields are strong enough to prevent light from escaping are called event horizons. In accord with the mass-energy equivalence described by Einsteiin’s famous equation E=mc2, the gravitational energy gives black holes their mass.

The giant at the center of the NGC 4889 is now at rest, still digesting  its “king size” meals it devoured in the past, allowing new stars to form in the remaining gas and orbit it at breakneck speeds.

But during the time the giant was awake and hungry, huge gas clouds and nearby stars it attracted from the vicinity must have formed an “accretion disk” around it before they were gulped, rotating in ever greater speeds as they drew closer in and heated to millions of degrees , emitting energetic X-rays. They must also have hurled part of their material to vast distances as relativistic jets, or narrow beams of energetic particles travelling at speeds close to that of light.

Click on the link to zoom through Coma cluster to NGC 4889: