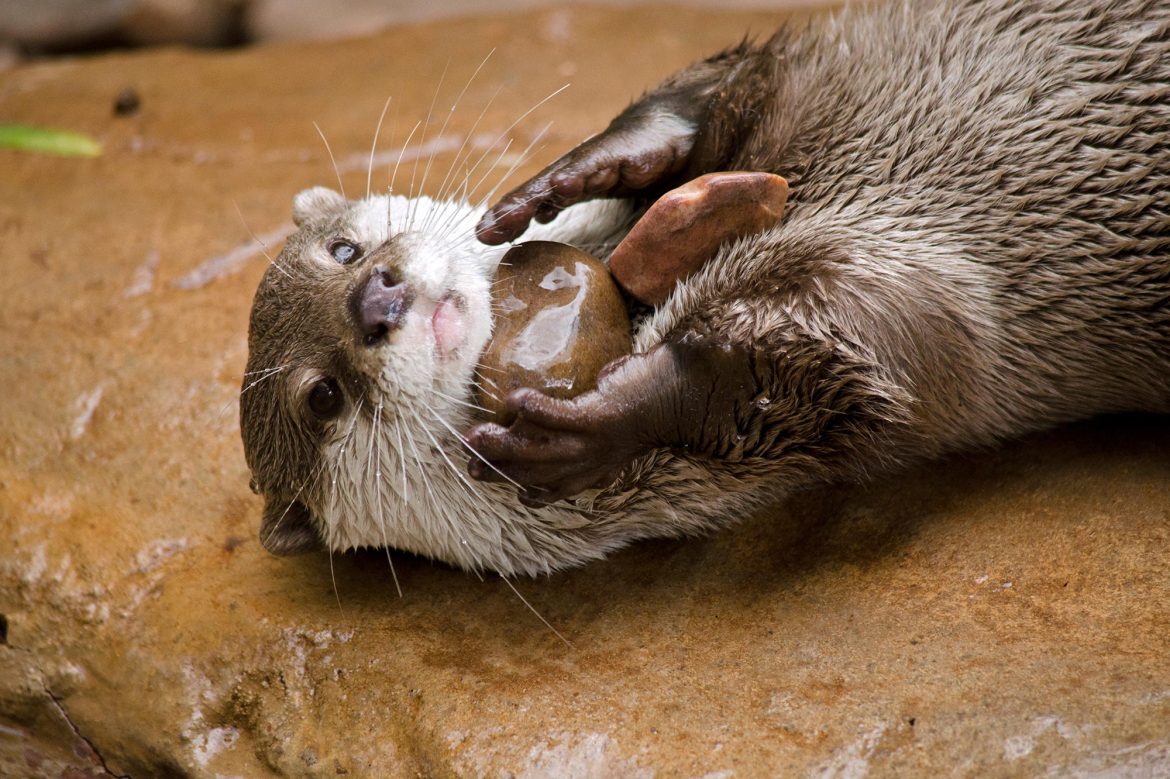 Otters are known to juggle stones in their hands, a rather cute play to watch. A study examined the evolutionary benefit of these plays and claimed that these cute mammals exhibit this interesting behaviour merely out of boredom or pleasure. Some otter species in a zoo were even observed to juggle with greater excitement when their mealtime was near!

Otters are also known to use stones as tools for eating. They remove crabs, sea urchins, and mussels with these “tools” and manage to reach the food inside their shells. And in fact, otters are among the very few animals known to use tools -other than primates. Floating happily on the water on their backs, they throw stones in the air, turn them on their bellies, and they can do all these with their eyes closed. The most surprising of all, they build an emotional bond with these stones. They have “favourite stones” that they carry under their arms when they are not using them. They keep those favourites all their lives. Not all otters use tools, but sea otters are quite fond of them.

Biologists have always been interested in the concept of “game” and the role it plays in evolution. Scientists believe this behaviour, exclusively seen in mammals (and some birds), might be a side effect that has escaped natural selection. This is because playing games consumes energy and can be dangerous, it may attract predators and/or may as well cause injuries. However, some aspects of playing games facilitate adaptation, which is critical for survival, and in the evolutionary sense, these aspects might be counterbalancing its possible undesirable results. Studies, and four assumptions, in particular, scrutinize the aspects of playing games that promote and enhance survival skills in young mammals:

Young mammals are able to invest a lot of time playing games as their parents provide enough food and safe space. Otter mothers, on the other hand, must make a lot of effort to achieve this. To raise her offspring, an otter mom consumes about 930 megajoules of energy, which is equal to 133% of her own bodyweight!

Mari-Lisa Allison and her colleagues, who studied this behaviour of otters during their graduate years in the University of Exeter (England), conducted three tests to examine the benefits of juggling stones, which unfortunately revealed this skill was quite useless in gathering food.

Allison states the Asian small-clawed otter (Aonyx cinerea) is the most playful of all 13 species, adding that smooth coated otters (Lutrogale perspicillata) also play with stones, but they do not actually need good stone-using skills for gathering food as their diet relies on fish.

Allison had predicted that since otters have different feeding habits, the ones feeding on crustaceans would need better skills to remove meat from crevices than those feeding on fish. The team monitored otters work their magic when they were presented minced meat placed in various objects including a plastic medicine box with a twist-open lid, a torn tennis ball, and toys similar to mussel shells. In their experiments, they discovered that both species were able to get the meat out equally easily.

Experts also believe that adult individuals also play with stones as often as younglings, which means this skill is not only aimed at improving the food-gathering skills of young otters.

Otters, with their cute expressions and movements, are mammals that can easily steal your heart. Although they can be found in many aquatic environments, from the Amazons to Singapore and the rivers of England, sea otters only live in shallow waters in the North Pacific. Since they are on the upper parts of the food chain, they are very important for ecological balance. Although sea otters, especially the ones in North America, faced the danger of extinction in the 19th century as they were hunted for their furs, an international agreement signed in 1911 helped the populations of these sweet creatures living on the Pacific coast of the USA and Canada to restore their numbers.