Skip to content
Homepage Biology How Does a Tick Attach 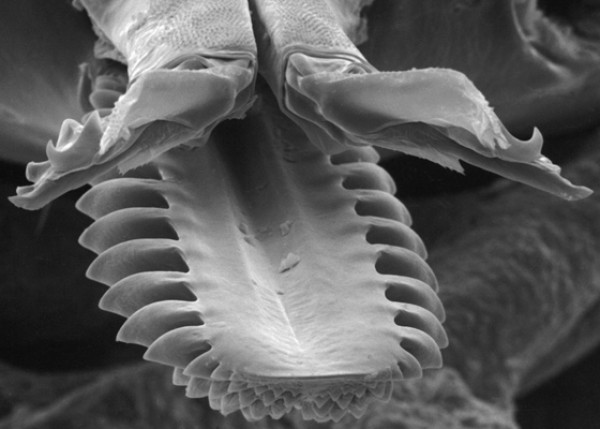 How Does a Tick Attach

Tick the bloodsucker, whose name began to be heard more in Turkey parallel to the rise in the cases of deadly Crimean-Congo hemorrhagic fever (CCHF) in recent years, owes its notoriety in America and Europe to the Lyme disease with which it infects the people it bites. Researchers recently captured on video the way  Ixodes ricinus, or the “wood tick”, a member of the Ixodes family  attaches to its host. The findings of the team led by Dania Richter from Berlin’s Charité University and Harvard University,show that  Ixodes, belonging to the class of eight-legged Arachnidae, makes use of its mouthparts bristling with hooks and barbs to access and suck the blood of its host. The tick first uses two thorny mouthparts called chelicerae (seen in the upper part of the image) to probe and penetrate the skin. After tentatively holding onto the skin with tiny hooks on the chelicerae, it repeatedy inserts and retracts these organs to bury a stiff, tongue-like structure called hypostome, richly endowed with barbs and spikes, into the host’s skin. Then it forms a tube by bringing  chelicerae and hypostome together and starts feasting on blood undisturbed for about a week. In order to avoid detection and ejection it secretes its saliva which contains chemicals preventing itch and swelling while numbing pain.

The disease, which took its name from the town of Lyme in Connecticut where an outbreak of cases were seen in 1975, is communicated with the bite of ticks infected with bacteria from the class Borrelia. If not treated with antibiotics, the disease, typically epitomized with a bull’s eye shaped rash developing around the site of the bite, affects the heart and central nervous system.