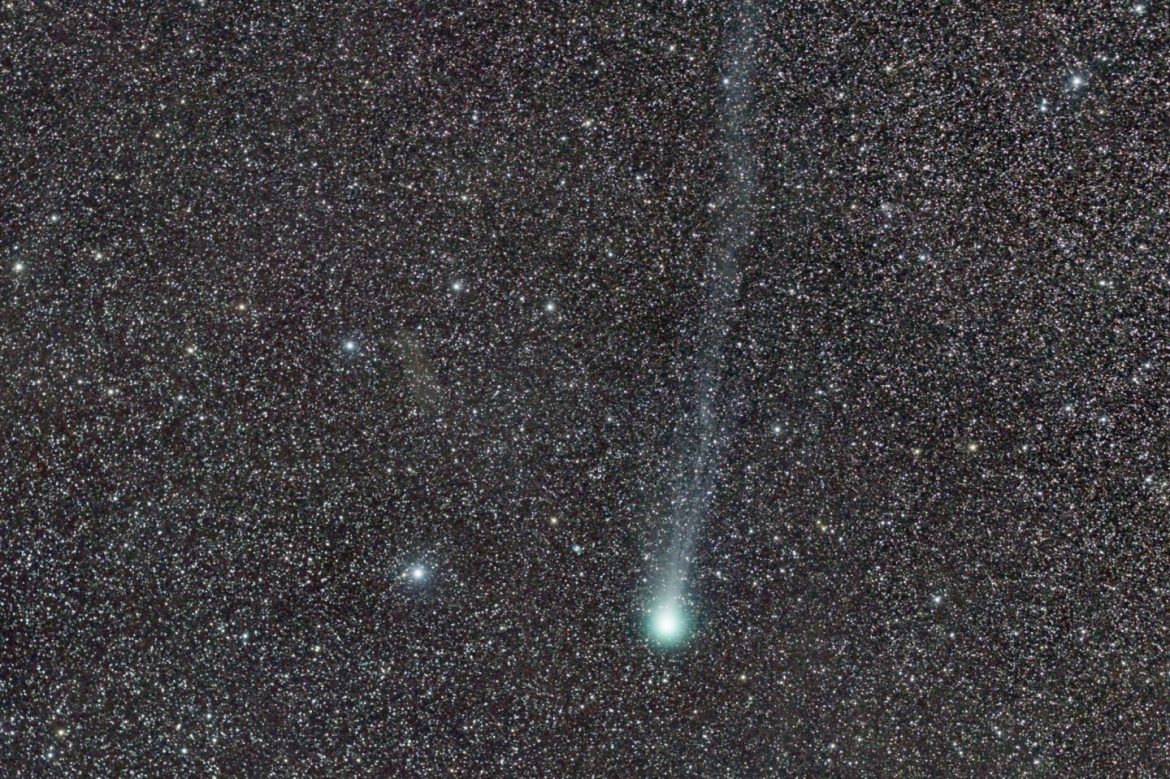 New observations by an international team of astronomers unequivocally show that comet Lovejoy lives up to its name – which some dictionaries translate as “happy person,” –  apparently filled to the brim with alcohol, of which it spews enough to make 500 bottles of wine every second

Ethyl alcohol is only one of the 21 organic molecules identified in the gas Lovejoy has been ejecting as it sped away from the sun after its closest approach on January 30. A simple sugar molecule, glycolaldehyde, was also detected in the gas.

Comets, aggregations of ice and rock typically a few kilometers in size, are debris left over from the formation of the solar system in a disc of gas and dust when an interstellar cloud collapsed under its own weight and disintegrated into clumps, each a stellar nursery.  Comets are now collected in two major reservoirs at the outer reaches of the solar system. One is the disk-shaped Kuiper Belt beyond the orbit of Neptune, and the other is the Oort Cloud, a cocoon of trillions of comets encasing the solar system from much farther away.

Every now and then some comets get dislodged from their nests for a variety of reasons and settle on trajectories which take them around the sun in short or long-term orbits. As they near the sun, the frozen volatiles in their nuclei sublimate and are spewed into space, carrying away loose dust with them. The flux of charged particles and radiation from the sun shape these into tails which can reach millions of kilometers in length

Observing Lovejoy as it turned around the sun, astronomers detected microwave radiation emitted by the spewed organic materials, alongside 20 tons of water vapor ejected each second, and made precise measurements which matched distinct wavelengths in the radiation to different organic (i.e. carbon-bearing) molecules.

The Philae lander, which the European Space Agency’s Rosetta spacecraft orbiting comet 67P/Churyumov-Gerasimenko released on its surface last year, had also reported the presence of a suite of 16 organic molecules, some of which were building blocks of amino acids essential for life, before a problematic landing drained it of energy. The source of these molecules is thought to be chemical processes taking place in huge gas and dust clouds in the interstellar space. Heavy elements blown into the space in supernova explosions which punctuate the lives of massive stars and the gas and dust released by sun-like stars puffed up to red giants towards the end of their evolution, enrich these clouds which give birth to new generations of stars and planets.

Carbon dioxide, water and other gases which had mixed into the cloud condense into thin films of ice on dust molecules, and radiation in the interstellar medium trigger chemical reactions in these coatings which produce complex molecules.

The comets and asteroids which have rained on the inner planets 3.8 billion years ago in an episode called the “late heavy bombardment” are thought to have ferried in the organic molecules which might have taken part in the evolution of life, besides the water which fills today’s oceans.