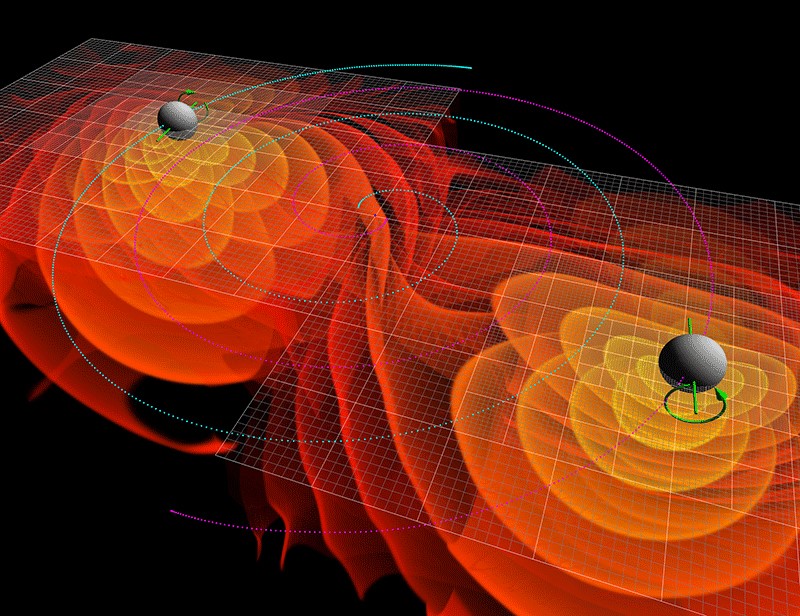 Gravitational waves, predicted by Einstein’s theory of general relativityt  were detected for a  second time within months.

The signal, recorded by two huge detectors called LIGO (Laser Interferometry Gravitational-Wave Observatory), one in Livingston, Louisiana andother in Hanford, Washington, on December 26,  was reportedly triggered by the merger of two black holes  1.4 billion years ago.

The statement from the officialsof LIGO Scientific Collaboration (LSC) noted that merger of the blackholes of 14 and 8 solar masses resulted in the formation of a new, spinning black hole with 21 times the mass of the sun and that the remaining one solar mass of matter was converted to gravitational energy which was radiated in every direction.

Researchers announced that the intercepted signal was emitted during the last 27 orbits of the two blackholes around each other in the final stages of the merger and lasted about a second.

This becomes the second  detection within the frst four-month run of the LIGO detectors after they underwent a major upgrade which vastly increased their sensitivity.

The first ever detection of the gravitational waves which caused ripples in the scientific world and provided a new tool for unravelling the secrets of the universe was announced on February 11. (See: KURIOUS).

LIGO team had noted that the signal had been produced by the merger of two black holes of 36 and 29 solar masses 1.3 billion years ago, with the waves causing the Earth to expand and contract by the diameter of an atomic nucleus as they went through the planet.

In the new statement, LSC  spokespersons said the fact that the merging  blackholes were  far less massive this time attested to the enhanced sensitivity of the LIGO detectors, adding that efforts were underway to make further improvements by the start of the second run this fall.

LSC is operated by the collaboration of over 1000 scientists at 90 universities in the U.S. and 14 other countries and 250 students.

The Virgo Collaboration which hunts for the gravitational waves from Europe brings together over 250 physicists and engineers, among whom is Imran Khan who has completed his graduate studies at Koç University (See: KURIOUS).