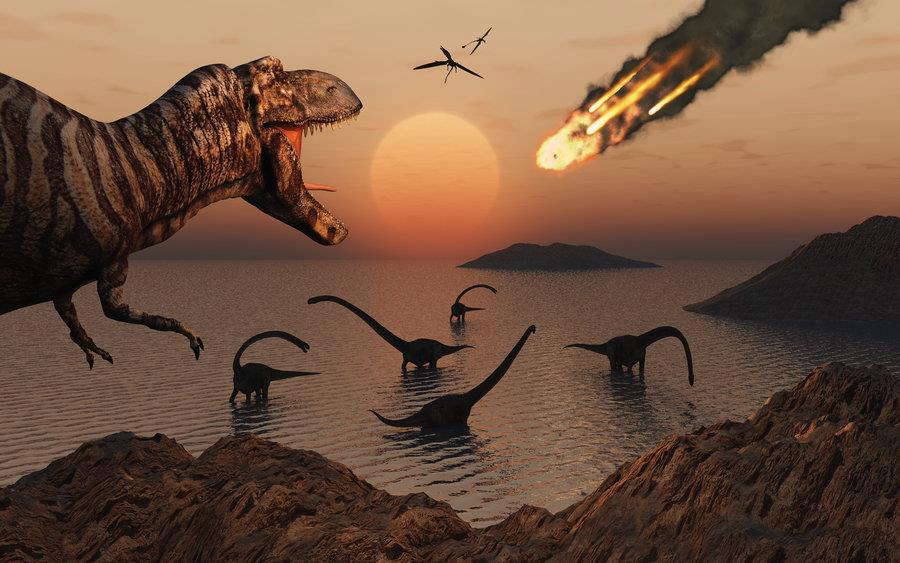 Did Dark Matter Stamp out Dinosaurs?

The episodes of mass extinctions of terrestrial and marine life forms in the geological past were until now attributed to a diverse set of causes, including asteroid or cometary impacts, intense volcanism lasting millions of years, sudden climate changes or declining sea levels.

A new study now adds another candidate to the list of culprits: Dark matter. This mysterious kind of matter is more than five times the familiar atomic matter which forms all the stars, galaxies, planets and giant clouds of gas and dust in the universe. Because it rarely and very weakly interacts with normal matter, it could not be observed in laboratory so far, making its presence felt only through the gravitational pull it exerts.

Proponent of the idea is Michael Rampino, a professor of biology at New York University. The mechanism he has proposed works this way: The Solar System sits within the disk of the Milky Way and completes its orbit around the disk in 250 million years.  But its orbital motion  has the shape of a wave, making the Sun and planets cross  the disk dense with stars and clouds of gas and dust once every 30 million  years.

Rampino points out that these passages coincide with mass extinctions seen once every 26-30 million years. The culprits for some of these extinctions were identified as asteroids or comets, like the one which struck Mexico’s Yucatan Peninsula, wiping dinosaurs off the face of the Earth. Others were volcanic eruptions which lasted millions of years, spewing massive lava flows which covered large areas, belching toxic gases and ash that masked sunlight and caused global cooling.

According to Rampino, dark matter explains both asteroid or comet impacts and major geological events. In the Milky Way disk thick with stars and gas and dust clouds, dark matter also abounds in dense concentrations. Researchers calculate the presence of a solar mass of dark matter in every square light year of the disk. With its strong gravitational pull, this dark matter mass disrupts the orbital paths of asteroids and comets in the Solar System, flinging them towards the Earth and other inner planets.

Furthermore, dark matter accumulates in the Earth’s core as it makes the passage through the Milky Way’s disk. By interacting with themselves, the dark matter particles cause the temperature of iron-nickel core to increase by hundreds of degrees Celsius. The excess heat causes the formation of large columns of superheated molten rock called “plumes” within the silicate mantle surrounding the core, which rise to the planet’s crust causing volcanic eruptions, forming (climate changing) mountain ranges and triggers tectonic activity which is another  major cause of mass-extinctions.