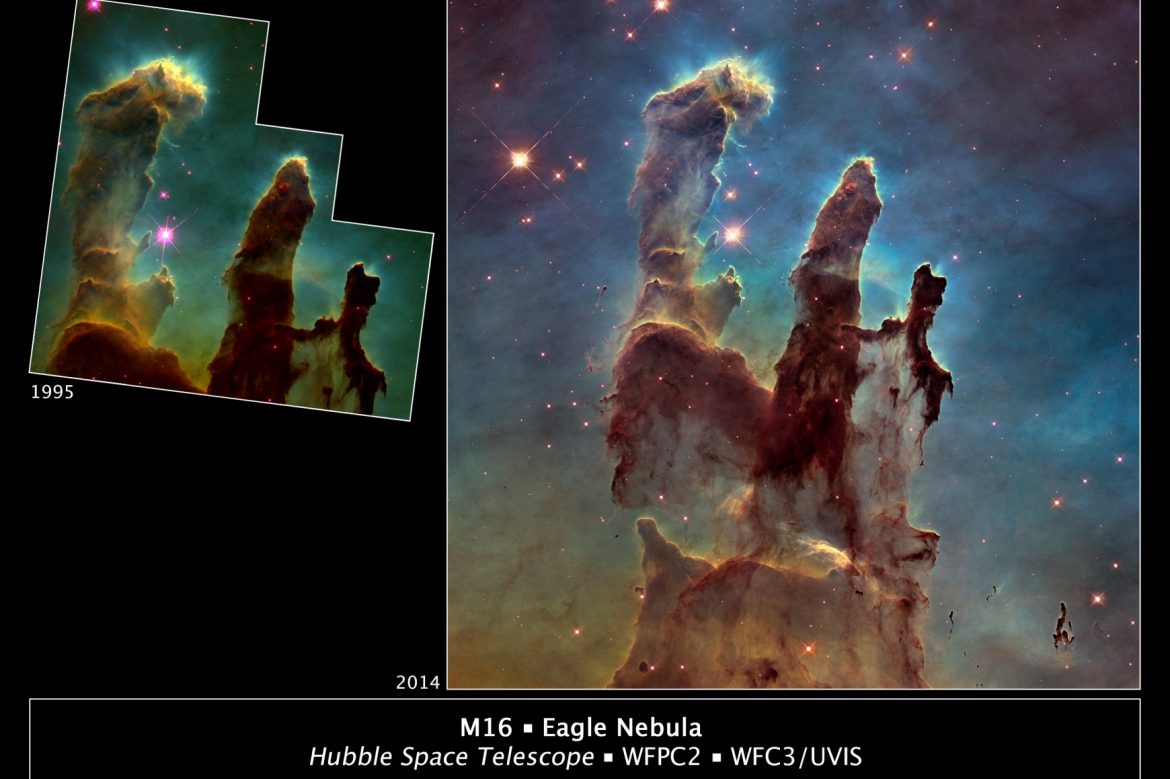 As part of the run up to the 25’th anniversary of the Hubble Space Telescope, NASA has published a new image of the iconic “Pillars of Creation”, the columns of gas and dust at a small portion of the Eagle Nebula 6500 light years away, which incubate stars in the process of formation.

Whereas Hubble’s historic image (small picture) of 19 years ago was taken with an optical camera, the new image, taken last year with the space telescope’s new camera in optical and near infrared wavelengths displays features in finer detail. That’s because infrared photons can penetrate deeper into dust. Although at first look, the pillars do not appear to have changed much, the new image shows clusters of young and hot new stars evaporating the clouds with their powerful winds of charged particles and intense ultraviolet radiation.

Paul Scowen of Arizona Stae Univesity marvels at the transitory nature of these huge structures, noting that “they evaporate before our very eyes.” Explaining that the blue wispy fog lining the dense tops of clouds is matter heating and dispersing into space, he says the pillars were caught in a very special and short-lived period of their evolution.

Wieved in exquisite detail in infrared, the clumps of gas and dust at tips of columns shield the matter below from the scorching UV radiation from the hot stars. Space between the columns, lacking such protective caps, have eroded away.

Correcting a misconception, Scowen explains that it’s not the heat that causes the clouds to rise and disperse, but the radiation which ionizes the gas by stripping atoms of their electrons which are then swept away by the powerful winds of the massive stars.

A detail which has caught the eyes of astronomers comparing the old and new images just 19 years apart, a minute fraction of a second in cosmological time scales, is a jet seemingly ejected by a forming star, which has further extended 100 billion kilometers in between, which translates into a speed of 720.000 kilometers per hour.

Our sun has likely evolved in a similarly turbulent star-forming region , pointing to the evidence of radioactive fallout from a nearby supernova which mixed in the solar protoplanetary disk. This, the researcher says, shows that sun formed inside a cluster which included massive stars emitting ionizing radiation like those in the Eagle Nebula. Because the ones which seeded the solar system during its rapid formation could only be the behemoths whose lifespans cannot exceed 30-40 million years. “This means that when you look at the Eagle Nebula or any other star-forming region, you are actually looking at something similar to the environment in which the solar system formed”, says Scowen.