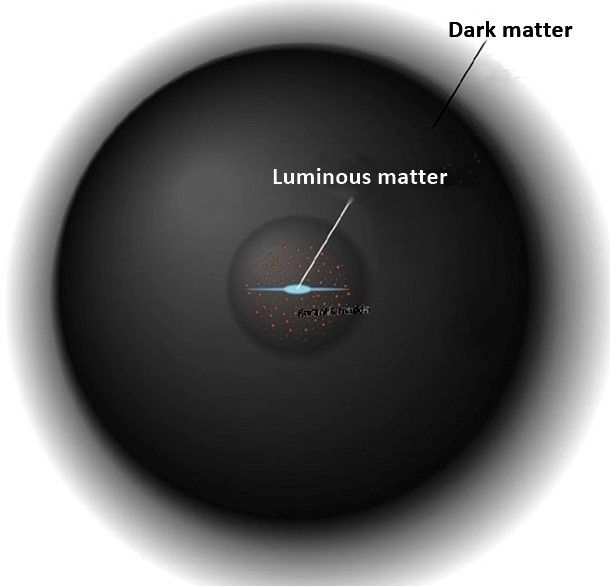 Scientists working with the world’s most sensitive dark matter detector installed in an underground gold mine in South Dakota, U.S, reportedly emerged empty handed from a 20-month hunt for the particles of the mysterious matter.

Data from the satellites which took extremely sensitive measurements on the Cosmic Microwave Background Radiation (CMBR), the relic of the first light which spread 380.000 years after the Big Bang which created the universe 13.8 billion years ago, revealed that ordinary (atomic) matter of which all the  stars, galaxies and huge intergalactic gas and dust clouds are formed, make up only about 5 percent of the energy budget of the universe (matter is also a form of energy in  accord with Einstein’s famous formula E = mc2), whereas the share of the dark matter is 27 percent.

This means that 85 percent of all matter in the universe is dark matter. An equally mysterious “dark energy” which is repulsive in contrast with gravity and is causing the acceleration of the universe accounts for the remaining 68 percent of the energy density of the universe.

In models for the  structure and evolution of the universe, the particles which top the scientists’ list of candidates for dark matter,  thought to surround galaxies and galaxy clusters as huge haloes, are those dubbed Weakly Interacting Massive Particles or WIMPs for short, which neither emit or absorb light (hence dark). As their names suggest, these hypothetical particles are believed to be quite massive. Physicists think their masses range from 1 to 1000 times the mass of the roughly 1 billion electronvolt mass of the proton, a basic constituent of the atomic matter. Although physicists generally search for WIMPS in mass ranges of hundreds of times the proton mass, lighter WIMPS below 10 proton masses are not ruled out. But since WIMPs, thought to interact only through the “weak force”, one of the four fundamental forces of nature which is responsible for the decay of particles, only very rarely interact with ordinary matter, these particles which pass through our hands in their billions every second, they also pass through the Earth as if it does not exist. Scientists estimate that for WIMPs to interact with one of the atoms in a block of lead with 50 percent probability, that lead block has to be 200 light years long (one light year is about 9.5 trillion kilometers).  And this length is 50 times the distance to the sun’s nearest neighbor!

The instrument scientists rely on in their quest to nab the dark matter particle is a detector called Large Underground Xenon or LUX for short, set up at the Sanford Underground Research Center buried 1500 meters deep in an old gold mine to screen it from cosmic rays and other sources of radiation.

Simply put, the detector is comprised of a container filled with 370 kg of liquid xenon and ringed with light detectors called photomultiplier tubes, which, in turn is immersed in a tank containing 270 tons of highly purified water.

What is hoped that a WIMP, would collide with one of the atoms in the liquid xenon in the container, and shake it, causing an electron, dislodged from its orbit around the atom’s nucleus to radiate light (Cherenkov radiation) which would be detected by the photomultiplier tubes along with a second light expected to be released when the dislodged electron, rising to the top of the container interacts with one of the atoms in the xenon stored there in gas form. In other words, the signature of the ghostly WIMP would be a pair of photons with specific properties.

But LUX physicists, participating in a dark matter conference held in Sheffield, UK, on July 21, reported that  no WIMP signature had shown up in  the 20-month-long second run from October 2015 to May 2016 with the detector whose sensitivity was boosted four times that of the original after the 90-day first run in 1913. But they said considerable success had been achieved in narrowing the possible mass ranges for the elusive particles.

Although they estimate dark matter particles can interact with a few atoms in 1 kg of xenon in a century, LUX scientists retain their hopes, placing their bets on the LUX-ZEPLIN (LZ) detector expected to enter service in 2020. Instead of the current 370 kg, LZ will run with 10 tons of liquid xenon in a titanium tank again to be screened by 270 tons of water, hopefully to provide the detector with a 50-fold increase in sensitivity.

Meanwhile other groups are engaged in their own hunt with different methods. One, based on the assumption that on its orbit around the Sun the Earth periodically moves in opposite directions in the “dark matter wind” , looks for seasonal fluctuations of signals captured by light detectors.

Some other groups focus their instruments on the Milky Way Galaxy’s central bulge where dark matter is hypothesized to be in higher concentrations, looking for the WIMP signature in specific intensity ranges of gamma rays theorized to be emitted when two WIMP particles collide and annihilate.

Hopes are also placed on the new run of CERN’s Large Hadron Collider (LHC) which is hoped to blast into existence some of the particles predicted by supersymmetry, a theoretical model proposed as an extension to the Standard Model, the ruling theory of subatomic forces and interactions. Supersymmetry posits the existence of far more massive “super partners” for the known matter and force-mediating particles, the lightest of which, photino and neutralino, are seen as likely WIMP candidates.

On still another track, some groups are on the hunt for a particle named axion, which has been proposed as rival dark matter particle. Contrasting the heft of the WIMPs, axion is theorized to be unimaginably tiny, packing a mass between two billionths and two trillionths of that of the electron, which itself has a mass two thousandths of that of the proton.

But although a sensitive detector has been put to work in recent years to snare the axion, no positive results have been achieved so far.