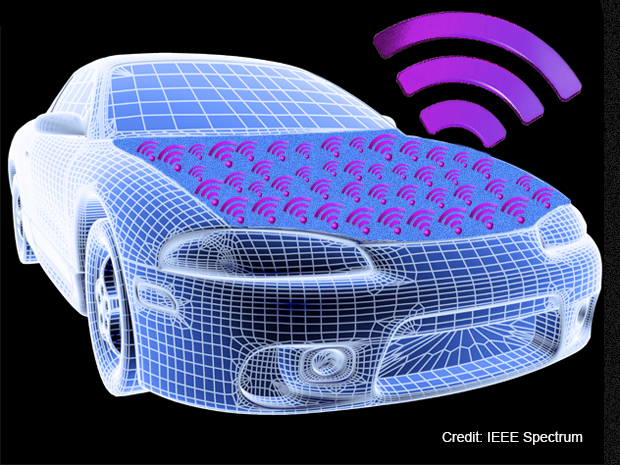 Ever asked yourself why we still have cables in our cars?

As drivers and passengers we don’t see these cables, but there is a heavy net under the seats.

So far wireless industry has removed cables for the connection of the computers to the Internet, phones to the telephone network, headphones to the phones.

A present-day wiring harness in a vehicle, on the other hand, may have up to 4000 parts, weigh as much as 40 kg, and contain up to 4 km of wiring. Wires cost money that car companies would rather not spend. Wires increase the weight of the vehicles, affecting their performance and fuel economy. Wires make assembly more challenging and increase maintenance cost. Wires make it harder to install new sensors. Wires are barriers to innovation.

So, why don’t we just remove these wires by using today’s wireless technology?

We cannot use today’s wireless technology, because vehicular environment is very different from the environment where the current systems are deployed. Vehicles contain a large number of metal reflectors and operate at extreme temperatures with a lot of vibrations. What’s more, vehicular control systems have to conform to very strict reliability standards. It is fine if your phone call is dropped, but it is not acceptable if your vehicle could not brake due to the loss of some sensor information.

Sinem Coleri Ergen received the BS degree in electrical and electronics engineering from Bilkent University in 2000, the M.S. and Ph.D. degrees in electrical engineering and computer sciences from University of California Berkeley in 2002 and 2005. She worked as a research scientist in Wireless Sensor Networks Berkeley Lab under sponsorship of Pirelli and Telecom Italia from 2006 to 2009. Since September 2009, she has been Assistant Professor in the department of Electrical and Electronics Engineering at Koc University. Her research interests are in wireless communications and networking with applications in machine-to-machine communications, control systems and intelligent transportation systems. She received TAF (Turkish Academic Fellowship) Network – Outstanding Scientist Award and Turkish Academy of Sciences Distinguished Young Scientist (TUBA-GEBIP) Award in 2015; Science Academy Young Scientist Award (BAGEP) in 2014; Turk Telekom Collaborative Research Award in 2011 and 2012; Marie Curie Reintegration Grant in 2010; Regents Fellowship from University of California Berkeley in 2000; and Bilkent University Full Scholarship from Bilkent University in 1995.

I started working on this problem during my Ph.D at University of California Berkeley. We placed wireless magnetic sensors inside asphalt to detect cars, and literally their make. Then, when I was a research scientist at Pirelli/Telecom Italia Wireless Sensor Networks Lab, we put electronics inside the tire.  Our design was an ultra-low power wireless communication system, powered by energy scavenging technology, to transfer accelerometer data from the sensors inside the tire to the coordination nodes in the body of the car, with the goal of improving the performance of active safety systems. The innovation, coined as Intelligent Tire, became a product in Pirelli.

When I joined Koc University as a faculty member in 2009, I asked the follow-up question: Can we remove all the existing wires within the vehicle? I received Marie Curie Reintegration Grant to answer this. We have modeled ultra-wideband communication channel beneath the chassis and within the engine compartment of vehicles, based on the extensive amount of data collected in Fiat Linea donated by Tofas and Peugeot Bipper, under a variety of scenarios such as engine turned off, engine turned on, vehicle moving on different types of roads at different speeds, for the first time in the literature. Ultra-wideband communication provides resistance to multipath fading, power loss due to the lack of line of sight, and intentional/ unintentional interference, accommodating robust performance at high data rate and very low transmit power. The engine compartment ultra-wideband channel model we have recently published in IEEE Transactions on Vehicular Technology has been highlighted in IEEE Spectrum. The magazine coined this work as Engine Area Network on our behalf!

If we remove the wires for data communication, we should also remove the wires for the connection to the battery of the vehicle to supply power. This means we need to achieve unlimited lifetime. We are planning to investigate communication protocols and energy harvesting technologies to achieve this unlimited lifetime. We will also extend the channel measurements to electric cars and different parts of the vehicles. This will not only make the auto manufacturing modular, but also lead to a multitude of varieties backed by solid innovation.