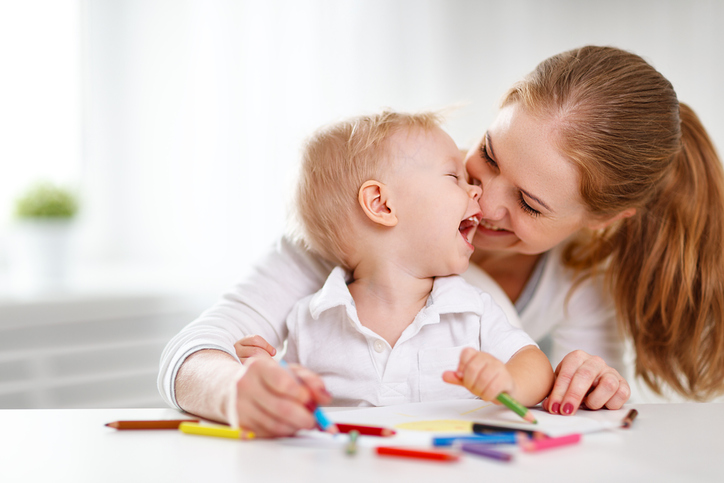 Have you ever played with a baby and wondered how she responds to your cooing sounds and “baby talk”?

A team of researchers from Princeton University report that baby and adult brains synchronize when they interact with each other through play.

The researchers, postdoctoral fellow Elise Piazza, Prof. Uri Hasson, and colleagues tested neural alignment between adult and baby brains using a newly developed dual-brain neuroimaging system: Functional near-infrared spectroscopy (fNIRS). With this new system, the experimenters were able to safely record oxygenation in the blood as a marker for neural activity in baby and adult brains during real-life communication.

For the study, only one adult interacted with 9-15-month-olds. In one condition, the adult spent five minutes playing, singing and reading with babies and toddlers. In the control condition, the adult simply told a story to another adult while the child played quietly with his/her caregiver.

The researchers reported that the fNIRS caps collected data from 57 brain channels that are known to be involved in prediction, language, and taking other people’s perspectives. The findings showed that baby and adult brains get in tune with each other during face-to-face interactions. However, the alignment got disrupted when the adult stopped interacting with the child.

When the brains were in sync, the researchers found a strong coupling in the prefrontal cortex (PFC). The PFC, like a CEO, is involved in higher-order brain functions such as learning, planning, and reasoning. In a way, this particular result came as a surprise to Dr. Hasson and the team because PFC is thought to be underdeveloped in babies and toddlers.

The research team also reported that babies actually led the adult by a few seconds. This particular finding suggests that babies are actively processing information coming from the adult and that they are not passive receivers of information.

According to Elise Piazza, a feedback loop is formed between the adult and the child when they communicate with each other. She further explains that “the adult’s brain seemed to predict when the infants would smile, the infants’ brains anticipated when the adult would use more ‘baby talk,’ and both brains tracked joint eye contact and joint attention to toys.”

Next up, the researchers are eager to investigate early language development in preschool children.